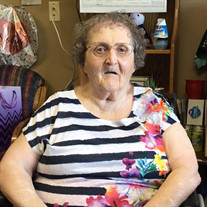 Carol Pauline (Schweitzer) Bruning, was born on May 30, 1935, to William and Pauline (Noel) Schweitzer, near Strang, Nebraska. She passed away on Thursday, March 26, 2020, at the Hooper Care Center in Hooper, Nebraska at the age of 84. She was the youngest of five children. Carol accepted Christ as her personal Savior in her youth. She was baptized and joined the Salem Mennonite Church, rural Shickley, Nebraska. She attended country school near Strang, Nebraska through the eighth grade. She then worked on the farm helping her dad and brothers until she got married. Carol married Stanley George Bruning on May 3, 1959, at the Salem Mennonite Church, rural Shickley, Nebraska. The couple first lived in Bruning, Nebraska for a short period of time. They then moved to the family farm, where Stanley and Carol briefly farmed, before moving to Shickley, Nebraska. In Shickley, they raised their three children: Tom, Brent and Julie. Carol worked hard to provide for her children, holding many jobs throughout her life. She worked at Busse Food Center in Shickley, while cleaning houses and selling Avon door to door. She also worked at the Shickley Public School alongside her husband as a janitor and also at the Longhorn Café. She then did private home health care, and she worked at the Fillmore County Hospital as a cook. She received her certified nursing assistant certificate and started working at Heritage Crossings in Geneva, and then she went to work at Fairview Manor in Fairmont before retiring. Carol’s strong faith in Christ was always the center of her life. She loved sewing, baking, gardening and canning foods. Her greatest joy was spending time with her grandchildren and great-grandchildren. Carol was preceded in death by her parents; husband Stanley; brothers, Boyd and Lyle; sisters Doris Lichti and Ruth Swatzendruber, two sisters-in-law and two brothers-in-law. Carol is survived by sons Tom Pokaluk (Sue Beck) and Brent Bruning; daughter Julie Kriete (Larry); sister-in-law Laurine Schweitzer; brothers-in-law Ross (Joann) Bruning, Wayne (Helen) Bruning; grandchildren Ben Bruning (Loretta), Phil Bruning, Nick Naimon, Matthew Naimon, Steven Naimon, Nathan (Alexis) Kriete, Josh Kriete and Nicole Warford; great grandchildren Draco Bruning, Ares Bruning, Wade Kriete and Hope Warford; along with many nieces and nephews. A Graveside Service for Carol was held on Monday, March 30, 2020, at 11:00 a.m. at the Bruning Public Cemetery in Bruning, Nebraska. Pastor Shawn Nolt officiated the Service. Farmer & Son Funeral Home was in care of the arrangements and online condolences can be left at www.farmerandsonfuneralhome.com Memorials are suggested to the Salem Mennonite Church, rural Shickley, Nebraska or the Evangelical Free Church, Geneva, Nebraska.

Carol Pauline (Schweitzer) Bruning, was born on May 30, 1935, to William and Pauline (Noel) Schweitzer, near Strang, Nebraska. She passed away on Thursday, March 26, 2020, at the Hooper Care Center in Hooper, Nebraska at the age of 84. She... View Obituary & Service Information

The family of Carol P. Bruning created this Life Tributes page to make it easy to share your memories.