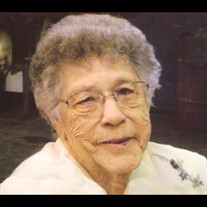 Carolyn Fern (Heuer) McMullen was born on June 26, 1927 to John & Dora (Mead) Heuer at Tobias, Nebraska. She passed away on Saturday, April 2, 2022 at her home in Geneva at the age of 94 years, 9 months, and 7 days. Carolyn graduated from Tobias High School with the class of 1945. After graduation, she taught country school for three years. During this time, she met her future husband, Wesley McMullen, of Friend, Nebraska, at the skating rink in Tobias. While Wesley was in the Navy, Carolyn worked at the Telephone Office, the Tobias Library and as a correspondent for the Tobias Times. She and Wesley were married at the Friend United Methodist Church on September 28, 1950, and they resided in Jacksonville, Florida while Wesley was still stationed there in the Navy. While living there, she was employed at Kress Department Store and later at Collier Publishing Company. In 1952, Wesley was discharged from the Navy and they returned to Nebraska and settled in Geneva. Four children were born to this union: Wesley Jr., Cindy, Deborah, and Sharon. After the children were all in school, Carolyn worked as a playground and lunch room supervisor at the Elementary School. She then took a position as the secretary to the Highschool Principal, remaining there for 17 years and retiring in 1989. Carolyn and Wesley enjoyed their retirement years traveling and camping. They belonged to the Good Sam’s and the Leisure Lovin’ Sam’s local chapter. They were snowbirds in Arizona for 13 years until health issues caused them to call it quits. They made many good friends over the years on their camping expeditions and winters in Arizona. Carolyn enjoyed doing crafts and was an avid Nebraska Cornhuskers and Denver Broncos fan. When Carolyn and Wesley first moved to Geneva, they joined the United Brethren Church where Carolyn taught Sunday school and Bible School. In 1973, the family joined the United Methodist Church in Geneva. She also was a member of the Rachel & Rebecca Circles and participated in volunteer work for the Church and Geneva Senior Center. Carolyn was preceded in death by her parents; husband Wesley; her father-in-law and mother-in-law Walter & Ollie Belle McMullen; sons-in-law Ray Rossi and Dennis Shannon; brothers and sister-in-law Burch & Francis Heuer and Rollin Heuer; brothers-in-law and sisters-in-law Dean & Betty McMullen, Lois & Dick Widick, Toby & Mary McMullen, Francis McMullen, Ralph McDaniel, and Don McMullen; and granddaughter Marcy Gaskill. She leaves to mourn her children (twins born 2 days apart) Wesley & Sally McMullen and Cindy Rossi, Deb Shannon, and Sharon & Greg King; grandchildren Connor & Shallyn McMullen, Nolan Gaskill, Nathan & Nicki Gaskill, Nichole Gaskill, Schuyler & Leah King, Andrea King, and Dawnna Frenzen; great grandchildren Tyler & Lauren McMullen, Alissa & Russell Benitez, Antonio, Nyca-Ann, Kersty, and Marci Gaskill; great great grandsons Jaxon Wesley and Mason McMullen; sisters-in-law Norma McDaniel and Greta McMullen; brother-in-law Fred McMullen; along with many nieces, nephews, step grandchildren and step great grandchildren. A Funeral Service for Carolyn was held on Friday, April 8, 2022 at 10:00 a.m. at the United Methodist Church in Geneva. Pastor Doug Griger and Kim Dunker presided over the Funeral Service. The recorded selections “Angels Among Us,” “How Great Thou Art,” “Amazing Grace,” “Go Rest High On That Mountain,” and “Near You” were played during the Funeral Service. Pallbearers included Connor McMullen, Schuyler King, Nolan Gaskill, Dora Nichole Gaskill, Nathan Gaskill, Andrea King, and Dawnna Frenzen. Honorary Pallbearers included Tyler McMullen, Brison Pursley, J.J. Pursley, Alissa Benitez and Briannon Pursley. A Graveside Service was held in the Geneva Public Cemetery following the Funeral Service. Farmer & Son Funeral Home was in care of the arrangements and online condolences can be left at www.farmerandsonfuneralhome.com Memorials are suggested to the United Methodist Church.

Carolyn Fern (Heuer) McMullen was born on June 26, 1927 to John & Dora (Mead) Heuer at Tobias, Nebraska. She passed away on Saturday, April 2, 2022 at her home in Geneva at the age of 94 years, 9 months, and 7 days. Carolyn graduated... View Obituary & Service Information

The family of Carolyn F. McMullen created this Life Tributes page to make it easy to share your memories.

Send flowers to the McMullen family.