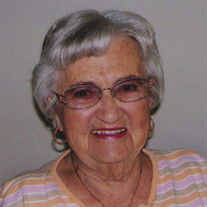 Funeral Services for Cecil will be 10:30 a.m. Tuesday, October 28, 2014, at the Farmer & Son Funeral Home in Geneva, Nebraska. Visitation will begin 1:00 p.m. until 8:00 p.m. Monday at the Funeral Home in Geneva. Interment will be in the Ohiowa Public Cemetery following the service. Memorials are directed to the family. Cecil Gladys Most Dittmer was born to Arthur L. Most and Willa Snodgrass Most on September 14, 1920, at Ohiowa, Nebraska, and passed away October 22, 2014, at the Good Samaritan Village in Hastings, Nebraska at the age of 94 years, one month and 9 days. She was an only child. Cecil was baptized in the Lutheran Church. She was confirmed July 21, 1935 at St. John’s Lutheran Church by Pastor E.C. Hansen. She attended Lonestar school and later attended Ohiowa Public School where she graduated in 1938. She then went on to attend Nursing school in Lincoln, Nebraska before coming back home. On October 7, 1943 she was united in marriage to Raymond William Dittmer in Belleville, Kansas. Six children were lovingly reared from this marriage, three sons and three daughters. She was also blessed with 18 grandchildren, 29 great grandchildren and 2 great great grandchildren. In her 94 years of life she was a homemaker and she ran the Most grocery before moving to Hastings with her family in 1969. While in Hastings she worked for many years at the Metz Bakery in the office, then it was off to Midland’s Restaurant to waitress. She later bartended at the Interstate 80 Holiday Inn. She also waitressed at Sunshine Pancake House east and west. During this time she would also help her husband Ray at Dittmer’s Liquor where she took care of the books. Later on in her life she worked at Sunnyside. Cecil’s first love was her family, which she always made time for day or night. One could always find Cecil at one of her grandchldren’s activities. She supported them with her whole heart. Be it football, basketball, baseball/softball, wrestling or their 4-H activities and shows, all the way to their graduations. When not spending time with her family she enjoyed spending time with friends playing cards or bingo or heading for a casino. When at home she enjoyed her plants, her dog and watching the food channel and sports on TV. She also enjoyed a good conversation and a cup of coffee or a stiff drink. She was a member of First St. Paul’s Lutheran Church. She was a very active member of the Adams County Senior Center where she held the Treasurer position on the Senior Council for many years, including this year. She was also a member of the Hastings Legion Auxiliary and past member of the VFW and Legion Auxiliary in Geneva, Cecil was preceded in death by her parents, Arthur and Willa Most, sons Donnie R. Dittmer and Gary L. Dittmer and grandson Lance W. Dittmer. She is survived by her son David Dittmer and wife Tami of Ohiowa, NE, daughters Sonya Dittmer of Glenvil, NE, Karon Eppenbaugh of Houston, TX and Rita Helms of San Jose, CA, 18 grandchildren 29 great grandchildren and 2 great great grandchildren

The family of Cecil G. Dittmer created this Life Tributes page to make it easy to share your memories.