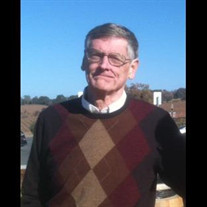 Charles Lewis Grote was born to Bernard Charles Grote and Florence (Stanard) Grote on December 13, 1946, at Shickley, Nebraska, and passed away on October 15, 2016, at his home in Shickley at the age of 69 years, 10 months and 2 days. He was one of three children born in the family. When Charles was a young child, the family moved to Missouri. They lived in several places including Independence, Balwin City, and Platte City, before settling in Lathrop. Charles graduated from Lathrop High School with the class of 1964. He then enrolled in the University of Missouri graduating with a Bachelor of Science Degree in Agriculture Education in 1968. After college, Charles moved to Shawnee, Kansas and taught at Shawnee High School for 8 years. In 1976 Charles moved to Lawton, Oklahoma and taught at Lawton College until 1990. He taught Commercial Horticulture while in Lawton. While teaching at Lawton, Charles obtained his Masters of Science and his Doctorate of Education Degrees in Agriculture Education. In 1990, he moved back to Shawnee, Kansas and taught at Johnson County Community College until 2004. As well as his teaching career, he did landscape design for a pool and patio company as well as for private clients. In 2011, Charles fully retired and moved to Shickley, Nebraska. While in Shickley, Charles immersed himself in the community. He was a member of the Shickley Library Board, Genealogy Society of America, FFA, and Geneva Library Secret Garden, lending his horticulture expertise to this group. Charles was preceded in death by his parents Bernard & Florence; brother James Fredrick (Fred) Grote. He is survived by his sister Kay (Grote) King and her husband Sam of Ione, California; niece Michelle Kesselman and her husband John of Stockton, California; great nephews RJ and Tommy Kesselman; 30 first cousins and many friends. Memorial services for Charles were held on Tuesday, October 25, 2016 at 10:00 a.m. at the Farmer & Son Funeral Home in Geneva. Kim Dunker officiated the service. Memorials are directed to the Quilts of Honor Headquarters 6516 Stabulis Rd. Valley Springs, CA 95252 or The Secret Garden - Geneva Public Library 1043 G Street, Geneva, NE 68361. Online condolences may be left at www.farmerandsonfuneralhome.com.

Charles Lewis Grote was born to Bernard Charles Grote and Florence (Stanard) Grote on December 13, 1946, at Shickley, Nebraska, and passed away on October 15, 2016, at his home in Shickley at the age of 69 years, 10 months and 2 days.... View Obituary & Service Information

The family of Charles L. Grote created this Life Tributes page to make it easy to share your memories.