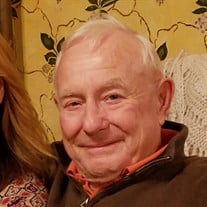 A Funeral Service for Charlie was held on Friday, October 26, 2018, at 10:30 a.m., at the United Methodist Church in Geneva, Nebraska with Pastor Douglas Griger officiating. Ben Kaye-Skinner accompanied Margaret and Raymond Nichols, as they sang “Amazing Grace”, a song that Charlie admired. Sondra Myers then accompanied the congregation as they sang “The Old Rugged Cross”. Pallbearers included Tucker Griess, Cobie Griess, Charles Trucchi, Maximo Trucchi, Joseph Briggs and James Briggs. Honorary Pallbearers were Michaela Carlson, Roseanna Briggs, Meghan Briggs, Charleigh Lynch and Rileigh Carlson. Graveside Services were conducted following the funeral service at the Geneva Public Cemetery. Memorials were directed to the Geneva Boy's Pond. Charles Fredrick Grothe was born in Geneva, Nebraska in the old Geneva Hospital on September 22, 1937, to Charles Albert and Elsie Beryl (Chesnut) Grothe. Along with his parents and his sister, Carol, he lived his childhood in Geneva and spent much of his time hunting, fishing, playing all sports and working at Geneva Milling Company. He attended UNL and earned his Bachelor’s Degree in Ag Economics. While at UNL he was a member of Theta XI Fraternity and served as President of the fraternity during his senior year at UNL. During his senior year at UNL, he agreed to go on a blind date with Patricia Cunningham. She became the love of his life and they married on December 7, 1959, in Primrose, Nebraska two years after the blind date and spent the next 58 years together. After graduating from UNL in 1959, Charles returned to Geneva to work in the family business, Geneva Milling Company (GEMCO). He purchased the business from his father, Charles A. in 1985 and spent a total of 50 years with the family business. After his son, Mike, purchased the business from him in 2002, Charles continued to work at the Mill until his retirement. Charles and Pat were blessed with 4 children, Michael, Teresa, Mary and Susan. As a lifelong resident of Geneva, he was very committed to the community and served on various boards and associations throughout his lifetime. He was a lifelong member of the Geneva Methodist Church and belonged to the Masons. Charles enjoyed fishing, golf, traveling with Pat, playing cards, gardening and spending time with family. Charles went home to Heaven on October 20, 2018. His kind words and infectious smile will truly be missed by all those that knew him as a husband, father, grandfather, brother and friend. He is survived by his wife, Pat; sister, Carol (Jim) Weiss of Elkhorn, Nebraska; son, Mike (Cindy) Grothe of Geneva, Nebraska; daughters, Teresa (Luigi) Trucchi of San Diego, California; Mary Briggs of Overland Park, Kansas; Susan (Jay) Lynch of Geneva, Nebraska; grandchildren, Michaela (Nate) Carlson, Charles Trucchi, Maximo Trucchi, Joseph (Briana) Briggs, Meghan Briggs, James Briggs, Roseanna Briggs, Tucker Griess, Cobie Griess and Charleigh Lynch; and 4 great-grandchildren. Preceding him death are his parents, Charles Albert Grothe and Elsie Beryl (Chesnut) Grothe and his father and mother-in-law, Lawrence and Rosanna Cunningham.

A Funeral Service for Charlie was held on Friday, October 26, 2018, at 10:30 a.m., at the United Methodist Church in Geneva, Nebraska with Pastor Douglas Griger officiating. Ben Kaye-Skinner accompanied Margaret and Raymond Nichols, as they... View Obituary & Service Information

The family of Charles Fredrick Grothe created this Life Tributes page to make it easy to share your memories.

A Funeral Service for Charlie was held on Friday, October 26,...

Send flowers to the Grothe family.