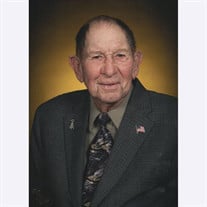 Charles Herbert Stoldorf, age 92, passed away Tuesday, October 28, 2014 in Geneva. He was an only child born to Albert Henry Stoldorf and Lela Geneva Hafer Stoldorf on March 30, 1922 in Geneva. Herb grew up on a farm northwest of Geneva and graduated from Geneva High School in 1940. On May 3, 1943, he was united in marriage to his high school classmate, Evelyn Lechtenberger. He served in World War II for three years in the Southwest Pacific. When he returned home, they adopted two children, Robert Charles and Debra Irene. Herb enjoyed farming and raising hogs. He also ran a Grade A dairy for 35 years. Herb and Evelyn shared interests of attending horse shows and ball games with the family. Herb also enjoyed socializing and playing cards with the guys at the Senior Center and playing bingo at Heritage Crossings. Herb was a lifetime member at the United Church of Christ where he was baptized and married. He served the church diligently during his life being on the Board of Trustees and in other capacities. He was also a lifetime member of the Veteran of Foreign Wars and the American Legion. Herb thoroughly enjoyed being a member of the Fillmore County Ag Society for 18 years. He loved volunteering and attending the Fillmore County Fair. He was preceded in death by his parents; wife, Evelyn; and triplet grandchildren. Survivors include son Robert Charles and his wife Patti; daughter Debra Irene; grandchildren Whitney Lauber, Josh Bowman, Kay Parent, and special cousins Lindsey and Tori Stoldorf. Funeral services for Herb were held on Friday, October 31, 2014 at 10:30 a.m. at the 1st United Congregational Church of Christ in Geneva. Pastor Michelle Gowin and Kim Dunker officiated the services. Maryann Najmon accompanied Susan Kerl in the singing of “How Great Thou Art” and “Amazing Grace.” She also accompanied the congregation in the singing of “Nearer My God To Thee.” Pallbearers for the service included Lance Fiala, Rick Stoldorf, Charles Brabec, Jon Scoville, Chuck Udell, Jr., and Jerry Shelton. Honorary bearers were Lindsey Stoldorf, Tori Stoldorf, Tom Trapp, Buzz Sole, Leonard Fiala, Brian Hafer, George Engle, and Elmer Dockter. Graveside services were held in the Geneva Public Cemetery following the funeral with military rites performed by Geneva VFW Samuel J. Marsh Post 7102. Farmer & Son Funeral Home conducted the services. Memorials are directed to the 1st United Church of Christ or the Geneva VFW.

Charles Herbert Stoldorf, age 92, passed away Tuesday, October 28, 2014 in Geneva. He was an only child born to Albert Henry Stoldorf and Lela Geneva Hafer Stoldorf on March 30, 1922 in Geneva. Herb grew up on a farm northwest of Geneva... View Obituary & Service Information

The family of Charles Herbert "Herb" Stoldorf created this Life Tributes page to make it easy to share your memories.

Send flowers to the Stoldorf family.