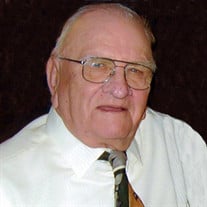 Funeral services for Charlie will be 10:30 a.m. Wednesday, December 14, 2016, at the United Methodist Church in Geneva, Nebraska with Rev. Michelle Gowin officiating. Visitation will begin Tuesday, 1:00 p.m. until 8:00 p.m. at the Farmer & Son Funeral Home in Geneva, with the family greeting friends from 4:00 pm until 6:00 pm Graveside services will follow the service at the Geneva Public Cemetery. Memorials are directed to the Geneva Rescue Unit or the Fillmore County Hospital. Charlie Fillmore Allgood was born to Clinton Briggs Allgood and Naomi (Shore) Allgood on Sept. 9, 1927 at Auburn, NE and passed away Dec. 9, 2016 at Heritage Crossings in Geneva at the age of 89 years and 3 months. He was 1 of 9 children in the family. Charlie was raised in Auburn and had many stories of those early years. He graduated from Auburn in 1944 at the age of 17 and joined the Navy (fibbing on his age). He was a cook on the USS Kermit Roosevelt, and had many stories from those years and his fellow servicemen. He was honorably discharged in 1949 and moved home, which at this time his family had relocated to Geneva. He met Dorothy Lovegrove, the love of his life, at the Safeway store in Geneva and was married October 6, 1949. He brought recipes from the Navy for meal sizes of 500 people to Dorothy for her to cut it down for just them 2. To this union, four children were born; Stanley, Virginia, Steven, and Victoria. Charlie and Dorothy built their home on a farm NW of Geneva where he was engaged in farming. In the winter, he worked various jobs; such as building KANEB pipeline and Geneva Implement. Later he became farm manager for Ashby Farms. Many high school kids worked summers under his watch, and he had many stories to recount about their antics and learning about things on the farm. In 1985, he was in a farming accident instantly retired him from his love of farming and changed his life forever. The once right handed, masculine man, he was presented the challenge of learning to use his left hand for everything, since his right hand was impaired. He began doing cross stitch on plastic canvas, but soon felt challenged to use adia cloth. This soon grew into beautiful pictures for significant people, special occasions, and some made simply for the challenge of it all. Many of his works were entered in the county fair and qualified to proceed on to the state fair where many top ribbons were received. One of his most unique and extraordinary pictures resides in an exclusive place in the front lobby of the Fillmore County Courthouse. Charlie and Dorothy later moved off the farm and into a condominium where they enjoyed being city folks. Their card group was a special bunch that always had a good time. His retirement years were spent putting around town to learn what was new before he collected the Ashby’s mail at the post office and headed to Dr. Charles’s house for coffee and to update Sherm and Dr. Charles with the latest happenings. He was the driver for Dr. Charles to out of town nursing homes and calls from which Marirose Fox can tell you stories of those two. Charlie was a member of the Fairmont Community Church, VFW, American Legion, Fairmont Rural Fire and Geneva Township Board. With age and failing health, Charlie and Dorothy moved to Heritage Assisted Living in Aug of 2008. Later that month, they would learn that Dorothy had pancreatic cancer and passed away on Christmas Eve of that year. After 59+ years together, it was hard on Charlie. With more health issues arising for him, he was moved to the skilled side of Heritage where he remained till his death. Heritage became his second family who he valued greatly. He is preceded in death by his wife, Dorothy, parents, Clinton and Naomi Allgood; brothers and sister-in-law, Frank Allgood, and Bill and Lucy Allgood; sisters and brothers-in-law, Bonnie and Bailey Livings, Lettie and Bob Schulz, Don Lovegrove, Maurice Lovegrove, Infant brothers Harry and JR., and brother-in-law Bud Daniels. He leaves to mourn, daughters, Virginia (Mike) Johnson, Sutton; Vicki Allgood, Seattle, WA; sons, Stan and Steve, both from Geneva, 5 grandsons and 9 great-grandkids, Cory (Leslie) Taylor, Mason and Clay Johnson, Gretna, NE; Scott (Steph) Ellie and Simon Johnson, Minneapolis, MN; Adam (Melanie)Amelia and Fletcher Johnson, Lincoln, NE; Eric (Angela)Jackson and Jacy Allgood, Henderson, NE; and Aaron Allgood, Friend, NE, sisters, Jeri Daniels and Shirley Ward both of Geneva, sisters-in-law Barbara Allgood, Deptford, NJ, and Roma Lovegrove of Waverly and a host of nieces, nephews and friends.

Funeral services for Charlie will be 10:30 a.m. Wednesday, December 14, 2016, at the United Methodist Church in Geneva, Nebraska with Rev. Michelle Gowin officiating. Visitation will begin Tuesday, 1:00 p.m. until 8:00 p.m. at the Farmer &... View Obituary & Service Information

The family of Charlie F. Allgood created this Life Tributes page to make it easy to share your memories.

Funeral services for Charlie will be 10:30 a.m. Wednesday, December...

Send flowers to the Allgood family.