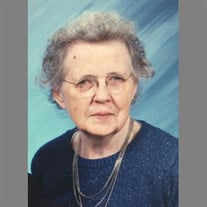 Funeral services for Charlotte will be held on Tuesday, December 8, 2015 at 10:30 a.m. at the 1st St. Paul's Lutheran Church in Hastings. Pastor Joel Remmers will officiate the services. A graveside committal will be held on Wednesday, December 9, 2015 at 11:00 a.m. at the Zion Lydia (Evangelical) Lutheran Cemetery rural Wichita County, Kansas. Charlotte (Strickert) Goken Pickerell was born September 13, 1918 in Scott County, Kansas, to Oscar William Strickert and Mary Charity (Nelson) Strickert. She was the eldest of three children. She passed away on December 2, 2015 at the The Kensington Assisted Living in Hastings, Nebraska at the age of 97 years, 2 months, and 19 days. She was one of three children born in the family. Charlotte received her education in rural school and in the Scott City, Kansas Junior and Senior High Schools, graduating in 1935. She attended Ft. hays State College and received a teacher’s certificate, after which she taught rural school for two years. On April 25, 1940, she married Bernhard J. Goken in Scott City. They farmed and ranched in Wichita County, Kansas, near Leoti. The couple had one child, Melvin Russell Goken, who died a few hours after birth. In the fall of 1960, they moved to Scott City, Kansas, which was Charlotte’s home until the fall of 1992 when she moved to Hastings, Nebraska. She lost her husband, Ben, who passed away December 23, 1989. Charlotte was united in marriage to Gerald A. (Jerry) Pickerell on September 27, 1992. They were divorced on October 12, 2012. Charlotte was a member of 1st St. Paul’s Lutheran Church in Hastings since 1992 and was active in several groups in the church. Charlotte was preceded in death by her parents; her husband Ben; son Melvin Russell Goken; brother James R. Strickert; and by sister Mary Strickert. She is survived by several nieces and nephews in Kansas, Colorado, Arizona, and Nebraska. Funeral services for Charlotte were held on Tuesday, December 8, 2015 at 10:30 a.m. at the 1st St. Paul’s Lutheran Church in Hastings. Pastor Joel Remmers officiated the funeral service. Ruth Moore accompanied the congregation in the singing of “In The Sweet By And By” and “When The Roll Is Called Up Yonder.” Interment was held on Wednesday, December 9, 2015 at 11:00 a.m. at the Lydia Zion (Evangelical) Lutheran Cemetery south of Leoti, Kansas. Pastor Patrick Gumz officiated the graveside service. Charlotte was laid to rest beside her first husband, Bernhard. Farmer & Son Funeral Home of Geneva conducted the services. Memorials are directed the 1st St. Paul’s Lutheran Church in Hastings, Nebraska.

The family of Charlotte (Goken) Pickerell created this Life Tributes page to make it easy to share your memories.

Funeral services for Charlotte will be held on Tuesday, December...

Send flowers to the Pickerell family.