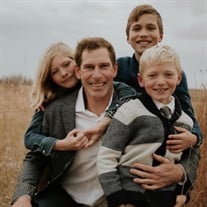 Christopher John Eitzmann was born April 1st, 1977, in Belleville, KS to Scott and Connie Eitzmann. He was the eldest of five siblings. He spent his childhood in Byron, NE on a family farm. He loved his upbringing and always felt comforted by his small community, which he thought of as an extended family. He was a doting older brother and he cherished his role as protector for his younger siblings. As Chris grew on the farm, so did his love for the outdoors. He enjoyed hunting, fishing, camping, and found peace in wide open spaces. As an adult, Chris loved to recall stories for his kids about the shenanigans he and his siblings got into on the farm, from building forts, jumping off the roofs of outbuildings, racing go carts, and spear fishing in the Republican River. Chris was baptized on April 24, 1977 and confirmed in faith on June 2, 1991 at the St. Peter’s church in Byron, NE. In high school, Chris emerged a leader both intellectually and athletically. Chris was proud to graduate Valedictorian of his high school class in 1995. It was also in high school that he developed his love for sports. His natural athleticism helped him to excel in any sport he chose to play. From basketball, to football, to track, he was a leader on and off the field. However, Chris’s biggest love in sports was football. Though he started out playing only six man football, he was gifted enough to catch the eye of college recruiters from across the country. During his senior year, he was faced with the tough decision of playing either for Nebraska’s beloved Tom Osborne and the Huskers, or following his adventurous heart to the east coast to attend Harvard and play for the Crimson. In 1995, Chris made the 1600 mile trek to Boston to begin his journey at Harvard University, pursuing a degree in Psychology. While attending Harvard, Chris’s football career flourished. Not only did he letter all four years, he was also nominated for First Team All Ivy League and All American Farm Team, in his senior season. Also, during his senior year, he was nominated captain of the team which he viewed as an immense honor. These accomplishments on the football field did not, however, detract from his devotion to his degree as he graduated Cum Laude in 2000. After college, Chris set his sights on the NFL and started his professional football career with the New England Patriots. He played several seasons with the Patriots, the Packers, the Browns, and the Frankfurt Galaxy in NFL Europe. Some of Chris’s most beloved memories from his college and professional football years did not necessarily have to do with games or practices, but instead with the many lifelong friendships he gained along the way. In 2003, Chris moved back to Nebraska and married his high school sweetheart, Mikaela Kempf. They lived in Lincoln, NE where Chris began his career in finance with Merrill Lynch. His desire to excel led the couple to New Hampshire where he pursued his master’s degree in business at Dartmouth College. Together there, they shared many adventures from skiing at Whistler to hiking in Costa Rica. Chris graduated from the program with honors in 2007. After Chris’s time at Dartmouth, the couple moved to Jamaica Plain, MA where he continued his career with Raptor Group and Putnam. During their time in Boston, the couple was blessed with four children, Coen, Asher, Seth, and Lila. It was when he had children that he discovered his true passion, being a father. As a Dad, what he wanted most was to encourage his children’s curiosity and their understanding of unconditional love. Chris also cherished playing “Coach Dad” and passed on his love for sports to his kids. Chris will leave a legacy of faith, leadership, perseverance, determination, and devotion to family and friends. Chris was preceded in death by his father-in-law Michael Kempf of Shickley, NE; grandparents Martin and Lola Eitzmann of Byron, NE, grandmother Alvina (Flathman) and Werner Hoops of Byron, NE, grandfather John Flathman of Chester, NE; grand father-in-law Rowen Kempf of Shickley, NE and grand parents-in-law Chet and Billie Larson of Edgar, NE. Chris is survived by his wife, Mikaela Eitzmann and children Coen, Asher, Seth and Lila Eitzmann of Shickley, NE; his parents, Scott and Connie Eitzmann of Hardy, NE; his brother Nathan (Megan) Eitzmann of Blue Earth, MN, sister Tracy Garcia of Lincoln, NE, brother Barry (Danae) Eitzmann of Seward, NE, brother Cody (Taylor) Eitzmann of Seward, NE; mother-in-law Jill (Mike) Cavanaugh of Apple Valley, MN; sisters-in-law Danielle (Doyle) Horwart of Burnsville, MN, Jaimee Mannix of St Louis, MO, Kirstyn Mannix of Minneapolis, MN; brothers-in-law Jordan (Molly) Mannix of St Louis, MO, and Kellen Mannix of Valdosta, GA; along with numerous nieces, nephews, family and friends. A Funeral Service for Chris was held on Saturday, January 8, 2022 at 11:00 a.m. at Peace Lutheran Church in Deshler, Nebraska. Pastor Joseph Love presided over the Funeral Service. Julia Pohlmann & Marla Maschmann accompanied the congregation in the singing of “I Was There To Hear Your Borning Cry” and “In Christ Alone.” Julia also accompanied Heath Hoge in the singing of “Amazing Grace.” The recorded selection “I Am” was played as the final song. Pallbearers for the service included Coen Eitzmann, Scott Larkee, Joe Mattson, Anthony Ackil, Artie Jones, Mike Shreve, Brian Lehmann, and Lance Kuhlmann. Honorary pallbearers included Asher Eitzmann, Seth Eitzmann, Lila Eitzmann, Nate Eitzmann, Barry Eitzmann, Cody Eitzmann, Brian Garrels, Heath Eitzmann, Judy Larkee, and Doyle Horwart. Chris was cremated following the Funeral Service and his ashes will be placed in the Shickley Cemetery at a later date. Farmer & Son Funeral Home was in care of the arrangements and online condolences can be left at www.farmerandsonfuneralhome.com Memorials are suggested to the Chris Eitzmann Memorial Fund for CTE Research at Concussion Legacy Foundation. https://www.classy.org/campaign/imo-chris-eitzmann/c384978

Christopher John Eitzmann was born April 1st, 1977, in Belleville, KS to Scott and Connie Eitzmann. He was the eldest of five siblings. He spent his childhood in Byron, NE on a family farm. He loved his upbringing and always felt comforted... View Obituary & Service Information

The family of Chris J. Eitzmann created this Life Tributes page to make it easy to share your memories.

Send flowers to the Eitzmann family.