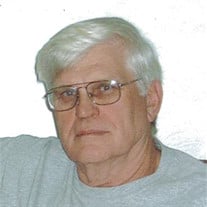 A Memorial Service for Clarence was held on Saturday, August 17, 2019, at 10:00 a.m., at the Grace Lutheran Church in Geneva, Nebraska with Pastor Nicholas Mount presiding. During the memorial service Organist, Cherie Domeier, accompanied the congregation as they sang “How Great Thou Art”, “Amazing Grace” and “In Christ Alone”. There was also a recorded selection played during Clarence’s service by the band, Corban Creek, named “Precious Lord”. Urn Bearers were Travis Adams, Trevor Adams, Keenan Shiley and Tyler Rafan. Honorary Urn Bearers included Kaitlyn Brown, Jade Shiley, Trista Adams, Hailey Brown, Emily Ready, Cole Hester and Kaeleigh Shiley. Military Graveside Services were held following the memorial service at the Geneva Public Cemetery. Geneva VFW - Samuel J. Marsh Post 7102 & Nebraska Military Honor Guard conducted the Military Honors Service. A special song, “I Saw The Light”, by Jason Shiley was played at the graveside service following the military honors. Memorials were directed to the family to be designated at a later date. Farmer & Son Funeral Home was in charge of funeral arrangements. Clarence A. Shiley was born on April 21,1942, to Clarence D. Shiley and Josephine Marie (Lowe) Shiley in Verdon, Nebraska. He was one of 8 children. He departed this life on August 11,2019 at the Fillmore County Hospital at the age of 77 years, 3 months and 21 days. He grew up in the southeast Nebraska area and graduated high school at Stella, Nebraska in 1961. He moved to Omaha shortly after graduation and began working. Clarence joined the United States Army on May 26,1964, and served state side during the Vietnam War as a military police officer. He was discharged on May 25,1966. In June of 1968, he met the love of his life Patricia E. Hewitt. On November 23,1968, he and Patricia were joined in marriage in Fort Dodge, Iowa. To this union 4 children were born, Tina, Jason, Daniel and Karen. While living in Omaha, Clarence was employed by CG Smith as a carpenter and at Speedway Scaffolding. He would occasionally talk about his experiences at Speedway including, working at the Orpheum Theatre in Omaha and watching the painters paint all the amazing detail on the ceiling of the theatre, laying scaffolding while they were building the dam at Lake McConaughy, and the Bob Devaney Sports Center. In 1977, Clarence and his family moved to Stella, Nebraska, where they lived on a farm owned by his long time friend and classmate, Bill Ely. He worked just over the river from Brownville, Nebraska at Missouri Beef until the plant closed in 1984. Clarence and his family then made their way out to the Clay Center, Nebraska, area to be near his sister and find work. He was employed by Farmland Industries in 1984, as a tractor/trailer maintenance mechanic at their shop located in rural Geneva. He retired from Farmland as the shop foreman in 2003, when the company did some restructuring and closed the location where he was working. He was then employed by Fillmore County and worked as the custodian/grounds keeper at the courthouse in Geneva. He enjoyed working each day with his friends, Terri Volkmer and Richard Ellison, and the countless visits with all who were employed there. He retired from the courthouse in 2017, when he was diagnosed with cancer. Clarence was a "Jack Of All Trades" with love for many hobbies. He loved the outdoors, spending time with his family while hunting, camping and fishing. Clarence always looked forward to opening day of deer rifle season with his sons and grandsons. He enjoyed reloading ammunition between hunting seasons. His daughter remembers countless hours by his side watching him do leather work, making many things, raising rabbits, working with and riding horses, and listening to lots of music. He loved sports. Especially Husker Football and Royals Baseball. He hardly ever missed a sporting event played by his grandsons. He was an avid fan of Panther wrestling and made many trips to the state-wrestling meet in Omaha. He loved children. His grandchildren were his greatest treasure! Clarence joined Grace Lutheran Church in Geneva in 2001. He loved accompanying his church family to Youth Camp Jefferson in July every year. He would help cook and set up tubes for the kids to go tubing down the Blue River while at camp. Clarence's family will always remember him as a strong, hard-working, talented man who loved his family unconditionally. He was preceded in death by his parents, Clarence D. and Josephine M.; brother, Sherman; sisters, Nancy and Hazel Ann; and daughter Patty Jean. Clarence is survived by his wife, Patricia of Geneva, NE; sons, Jason Shiley of Geneva, NE, Daniel (Amelia) Shiley of Lincoln, NE; daughters, Tina (Tim) Adams of Geneva, NE, Karen Shiley (Mike) of Red Cloud, NE; Kaeleigh Shiley of Geneva, NE; brothers, Duane (Judy) Hoagland of California, Richard Shiley of Iowa; sisters, Judy (Bob) Phillips of Geneva, NE, Kathy (Zach) Vice of Verdon, NE; brother-in-law, James (Sue) Hirschberg of Lohrville, IA; sisters-in-law, Cathy (Neal) VanWyk of Otley, IA and Margaret Winker of Iowa; 10 grandchildren, 3 great grandchildren and many nieces and nephews.

A Memorial Service for Clarence was held on Saturday, August 17, 2019, at 10:00 a.m., at the Grace Lutheran Church in Geneva, Nebraska with Pastor Nicholas Mount presiding. During the memorial service Organist, Cherie Domeier, accompanied the... View Obituary & Service Information

The family of Clarence A. Shiley created this Life Tributes page to make it easy to share your memories.

A Memorial Service for Clarence was held on Saturday, August...

Send flowers to the Shiley family.