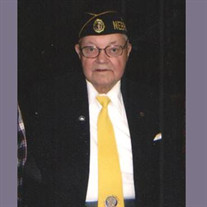 Funeral services for Claton will be held on Friday, April 24, 2015 at 10:30 a.m. at the Zion Lutheran Church in Shickley. Pastor James Moll will officiate the services. Miltary graveside services will follow the funeral in the Zion Lutheran Cemetery, rural Shickley. Military Rites will be performed by the Shickley American Legion Post 164. Visitation for Claton will be held on Thursday from 1:00 p.m. to 8:00 p.m. at the Farmer & Son Funeral Home in Geneva. Memorials are directed to the Zion Lutheran Church or the Shickley Community Foundation. Claton Wilfred Frieden passed away on April 21, 2015, at the Mahoney Assisted Living home in York, NE at the age of 86 years, 2 months, and 9 days. He was born February 12, 1929, at Shickley, NE, to Wilfred B. and Elsie (Goesch) Frieden. Claton was baptized as a infant by Rev. William Wietzke at Zion Lutheran Church, Shickley, NE and confirmed by Rev. John Rabbe, in 1943. Claton attended grade school at District 49 northwest of Shickley through the eighth grade. Claton was a farmer and in the land leveling business a good share of his life. The last 35 years he was a machinist and mechanic in Wilber and Shickley. In his younger years, he played softball and was an avid bowler until two years ago. He loved to go duck and goose hunting as well as fishing. Claton was an Army veteran serving overseas in Japan from 1954 to 1956. Claton held several offices in the churches he attended during his adult life. He attended Bible class at Zion until his health failed in the spring of 2013. Claton confessed Jesus Christ as his Lord and Savior. Claton was married to Barbara Dow in 1983. Claton was preceded in death by his parents, a brother Warren Wayne and a niece Lori Ann Nelson. He is survived by his wife Barbara of York, brother Earl Dean and Velda Frieden of Shickley, sisters Sherill and Gerald Crone Of Hastings, Ila Mae and Wayne Nelson of Hastings, and Opal and Lawrence Griess of Sutton. Nephews, Gail Griess, Craig Crone, and Conley Frieden. Nieces Beth and Ron Fitzke, Linda Nelson, Camella and Mike Walters, and Joni Griess. Great Nephew Wade Walters and fiance Abby Miller, Great Niece Whitney Walters and numerous cousins.

Funeral services for Claton will be held on Friday, April 24, 2015 at 10:30 a.m. at the Zion Lutheran Church in Shickley. Pastor James Moll will officiate the services. Miltary graveside services will follow the funeral in the Zion Lutheran... View Obituary & Service Information

The family of Claton W. Frieden created this Life Tributes page to make it easy to share your memories.

Funeral services for Claton will be held on Friday, April 24,...

Send flowers to the Frieden family.