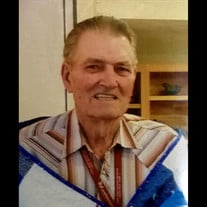 Clifford Dean Philippi was born on April 21, 1926 in Bruning Nebraska to Wilhelm F. Philippi and Grace Casper Philippi. He died on March 15, 2018 at the Blue Valley Lutheran Home in Hebron at the age of 91 years, 10 months, and 22 days. Cliff, as he was known to all, was a lifelong member of Trinity Lutheran Church in Bruning; the same congregation where he was baptized and later confirmed in March of 1940. He attended Bruning Public School graduating with the class of 1943. He farmed with his father and brother prior to enlisting in the United States Army during World War II. He served from June 18, 1945 to November 13, 1946 when he was honorably discharged. Cliff met Norine Lange at a Luther League rally at Zion Lutheran Church in Carleton. They were married on November 14, 1948. Cliff and Norine made their home on Pine Alley Farm, the ground homesteaded by his great­grandfather in 1882. Their daughter, Joy, joined the family on February 2, 1957. They lived on the farm until December of 1989 when they moved to their home in Bruning. When Cliff was not as busy on the farm, he was active in his church and the community. He was a member of the school board, village board, church council, a 4-H leader and served on many other committees. He was elected to serve several terms on the Thayer County ASCS Board. Cliff was an artist with wood. He built many cars and pieces of farm machinery. He seldom used a pattern designing the pieces to scale from photographs Cliff and Norine celebrated their 66th wedding anniversary prior to moving to Courtyard Terrace in Hebron. Following Norine's passing, Cliff remained a resident at Courtyard until last fall when he moved to Blue Valley Lutheran Home in Hebron. He was preceded in death by his parents; his brother Donald and wife Frances; brothers-in-law and sisters-in-law Loretta and Walter Heinrichs, Alma and Wayne Macy, Leo and Dorothy Lange, Norman and Mildred Lange, and John and Viora Bauman; nephews Rich Philippi and Larry Lange; step father Leon Herman and his children Erma and Elwin Block and O'Dale Herman. He is survived by his daughter Joy; sister Lucille Fitzke and her husband Ward; Honorary grandchildren Angie Theaker, Alison Stickel, and Scott Philippi; and by Ann and Kevin Shultz, Marilyn Philippi, and Carol and Leroy Voss and their families. They were considered the extra kids in his family that helped him so much the past several years. Other survivors include his nieces and nephews and their families, relatives and friends. A Funeral Service for Cliff was held on Saturday, March 17, 2018 at 2:00 p.m. at Trinity Lutheran Church in Bruning, Nebraska. Pastor Stuart Sell officiated the service. Myra Kluck accompanied the congregation in the singing of “Beautiful Savior” and “Lutheran Doxology.” Pallbearers for the service included Kurt Philippi, Scott Philippi, Neal Voss, Cory Voss, Elwyn Fitzke, Ron Lange, Mark Deterding, and Kyle Schultz. Honorary Bearers were Angie Theaker and Alison Stickel. Interment was held in the Trinity Lutheran Cemetery following the Funeral Service. Farmer & Son Funeral Home conducted the services and online condolences may be left at www.farmerandsonfuneralhome.com Memorials are suggested to the Nebraska Children’s Home Society, 4939 S 118th St, Omaha, NE 68137.

Clifford Dean Philippi was born on April 21, 1926 in Bruning Nebraska to Wilhelm F. Philippi and Grace Casper Philippi. He died on March 15, 2018 at the Blue Valley Lutheran Home in Hebron at the age of 91 years, 10 months, and 22 days. Cliff,... View Obituary & Service Information

The family of Cliff Philippi created this Life Tributes page to make it easy to share your memories.

Send flowers to the Philippi family.