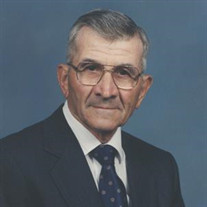 Clinton Dale Lauber, son of John and Lydia (Eichelberger) Lauber was born on April 2, 1916 near Shickley. He passed away on May 31, 2016 from pneumonia due to complications resulting from hip surgery at the age of 100 years and 2 months. Clinton enjoyed reaching the milestone of his 100th birthday that was celebrated a few weeks ago at Heritage Crossings of Geneva where he lived. Clinton accepted Christ as his personal savior in his youth and was baptized in the Salem Mennonite Church where he remained a faithful member until his death. He was married to Lorene E. Reeb on September 15, 1940 and to this union was born one son, Keith. The couple shared 45 rewarding years together until Lorene was killed in an auto accident on September 29, 1985. This was a very difficult time in Clinton’s life. Clinton was the oldest of three children. He was preceded in death by his parents, wife Lorene, and sister Wilda (Raymond) Kennel. He is survived by son Keith, sister Phyllis (LeMoine) Johnson, and nieces and nephews. He was a life-long farmer raising livestock and crops, beginning in 1940 until he retired in 1984. There were many challenges over the years, including drought, wind, and hail storms. In 1963 Clinton lost part of his hand in a corn picking accident, which required much effort and improvising to continue farming. But he adapted with ingenuity and perseverance. Clinton’s retirement hobby was woodworking and his rooms at Heritage showcased several beautiful replicas of things he constructed, including a steam engine, tractors, trucks, and vintage cars, all with parts that move, and several vases and quilt racks. It is a truly remarkable achievement after losing three fingers on his right hand in the corn picking accident. He was a good husband and a kind and loving dad. Clint was always concerned for the welfare of his family and will be greatly missed by family members, friends, and neighbors. Funeral service for Clinton will be 10:00 a.m. Saturday, June 4, 2016 at the Salem Mennonite Church, rural Shickley, Nebraska. Visitation will begins Friday, June 3, 2016 from 2:00 pm until 8:00 pm with family greeting friends from 6 to 8 at the Farmer & Son Funeral Home in Geneva, Nebraska Burial will be in the Salem Cemetery following the service. Memorials are directed to the Anabaptist Mennonite Biblical Seminary for Student Scholarships

Clinton Dale Lauber, son of John and Lydia (Eichelberger) Lauber was born on April 2, 1916 near Shickley. He passed away on May 31, 2016 from pneumonia due to complications resulting from hip surgery at the age of 100 years and 2 months. Clinton... View Obituary & Service Information

The family of Clinton D. Lauber created this Life Tributes page to make it easy to share your memories.

Send flowers to the Lauber family.