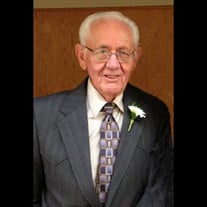 Clinton Lloyd Schweitzer was born to Lloyd and Dorothy (Oswald) Schweitzer on July 13th, 1935 in Carleton, Nebraska, and passed away at Bryan Health Services in Lincoln on October 18th, 2017 at the age of 82. There were 17 children in the family. He was the second oldest son of the family. Clint attended country school until the 8th grade, at which time he stayed at home and helped out on the farm. Clint and Marilyn Kay Reeb were married on September 12th, 1958. They were blessed with three children, Debra Kay, Steven Lloyd, and Tamara Jo. After Clint and Marilyn were married, he had several jobs including farming and running the portable feed grinder for Shickley Feed and Produce. In 1974, Clint and Marilyn purchased the IGA grocery store in Shickley and ran it for the next ten years. After selling the store, Clint briefly sold insurance, worked at Wheelers, and settled into the Maintenance position at Heritage until he retired. After retirement, he held several part time jobs including painting with his son-in-law and cutting meat at Petro in York. In all actuality, he retired about four times. Clint had a deep love for his wife and family. He enjoyed the outdoors including camping, hunting, and fishing. Some of his fondest memories were the hunting and camping trips with his son, son-in-laws, and grandsons. Clint spent a lot of time in his shop working with his hands. You never knew what he would create next. He was a long time member of the Evangelical Free Church in Geneva. His relationship with his Savior was important to him and he spent a lot of time reading and listening to God’s word. Clint was preceded in death by his daughter, Deb Davis, grandsons, Jeremy Davis and Nicholas Scheil, his parents, Lloyd and Dorothy Schweitzer, sisters, Bernetta Swartzendruber, Alberta Bruning, Betty Kennel, and Vera Lichti, brothers, Everett Schweitzer and Edward Schweitzer, two infant sisters and two infant brothers, brother-in-laws, Paul Bruning, Virgil Swartzendruber, Reuben Lichti, Donald Roth, and Robert Kremer, and sister-in-law, Marcia Schweitzer. He is survived by this wife, Marilyn of 59 years, son, Steve and wife, Lisa of Strang, daughter, Tami Scheil and husband, Mike of Fairmont, grandchildren, Jenna (Bobby) Johnson, Garrett (Katie) Schweitzer, Andrea (Zach) Smith, Kylee (Ryan) Stock, Luke (Aaryn) Schweitzer, Darren (Mikaela) Davis, Jessica Davis, Delaney Davis, Nathan Scheil, McKenzie Scheil, and Kaleb Scheil, 16 great-grandchildren, sisters, Marge Kremer and Mary (Jerry) Stutzman, brothers, Galen (Joan) Schweitzer, Nick (Kit) Schweitzer, Ron (Judy) Schweitzer, and John (Diane) Schweitzer, brother-in-law, Wayne Kennel, and many nieces, nephews, and friends. A Funeral Service for Clint was held on Monday, October 23, 2017 at 10:30 a.m. at the Evangelical Free Church in Geneva. Pastor Jeff Jensen officiated the service. The recorded selections “Go Rest High, On That Mountain,” “Gone On Before,” “Home,” and “Give Me Jesus” were played during the service. Pallbearers for the service included Garrett Schweitzer, Luke Schweitzer, Darren Davis, Kaleb Scheil, Bobby Johnson, Zach Smith, Ryan Stock, and Nathan Scheil. Interment was held in the Geneva Public Cemetery. Farmer & Son Funeral Home conducted services for Clint. Online condolences may be left at www.farmerandsonfuneralhome.com. Memorials are suggested to the Evangelical Free Church Building Project.

Clinton Lloyd Schweitzer was born to Lloyd and Dorothy (Oswald) Schweitzer on July 13th, 1935 in Carleton, Nebraska, and passed away at Bryan Health Services in Lincoln on October 18th, 2017 at the age of 82. There were 17 children in the family.... View Obituary & Service Information

The family of Clinton L. Schweitzer created this Life Tributes page to make it easy to share your memories.

Clinton Lloyd Schweitzer was born to Lloyd and Dorothy (Oswald)...