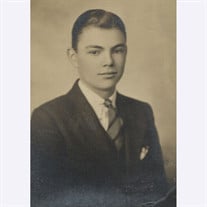 Funeral services for Cyrus will be held on Monday, September 29, 2014 at 10:30 a.m. at the St. John's Lutheran Church in Ohiowa. Pastors James & Becky Sells will be officiating the services. Graveside services will follow the funeral in the Ohiowa Public Cemetery. Public visitation will be held on Sunday, September 28, 2014 from 2:00 p.m. to 8:00 p.m. with family present from 6:00 p.m. to 8:00 p.m. at the Farmer & Son Funeral Home in Geneva. Memorials are directed to the St. John's Lutheran Church. Cyrus Henry Mussman was born to Henry Mussman and Emma Pfingsten Mussman on January 18, 1919 on a farm near Tobias, NE. He was baptized and confirmed in the Lutheran Church. He passed away on Thursday, September 25, 2014 at Heritage Crossings in Geneva, NE at the age of 95 years, 8 months and 7 days. Cy, as he was known by family and friends, spent his entire lifetime in the Ohiowa and Tobias area. He attended school in Tobias and graduated from Ohiowa High School in 1936. Cy was married to Gracie Diekhoff of Geneva, NE, on December 27, 1953 in a service officiated by Pastor Herman Diekhoff, the father of the bride. Cy was an active farmer for many years until his retirement in the early 1980’s. For many years beginning in the 1940’s he did custom corn shelling and custom hay baling for many area farmers. He especially enjoyed working with cattle and bringing in the fall harvest. Cy enjoyed spending time with family, playing cards with family and friends, travelling, and participating in church and community events. His grandchildren enjoyed many three-wheeler rides, first being held on his lap, then later graduating to the trailer behind. They also enjoyed riding the zip line that Grandpa built in the back yard. He was a skilled welder and was always looking to build things to solve problems. Cy enjoyed constructing farm buildings, hand-crafting machines, and inventing a few new farm implements. In 1963 he built a new house for the family with the help of Jim Schropfer. Cy was a member of St. John’s Lutheran Church in Ohiowa, and over the years served in every office of the church council. He served on the Ohiowa School Board, the Thayer County Extension Board, and the Alexandria Rural Fire Board. Cy was preceded in death by his parents, brothers and sister-in-law Otto Diekhoff, Martin and Betty Diekhoff, Edwin Diekhoff, and Rev. Leland Diekhoff. He is survived by his wife, Gracie, of Geneva, NE, son Alan and wife Kaye Mussman of Alexandria, NE, daughter Brenda George and husband Steve of Elkhorn, NE, six grandchildren (Dena Mussman Skiles, Leah Mussman Carlson, and Nathan, Ryan, Andrew, and Elizabeth George), one great grandchild McKinley Skiles, and brother Dallas Mussman and wife Claire Ann of Geneva, NE, sisters-in-law Shirley Diekhoff of Hastings, MI, and Myrlene Diekhoff of Austin, TX, and many nieces and nephews.

Funeral services for Cyrus will be held on Monday, September 29, 2014 at 10:30 a.m. at the St. John's Lutheran Church in Ohiowa. Pastors James & Becky Sells will be officiating the services. Graveside services will follow the funeral in... View Obituary & Service Information

The family of Cyrus H. Mussman created this Life Tributes page to make it easy to share your memories.

Funeral services for Cyrus will be held on Monday, September...