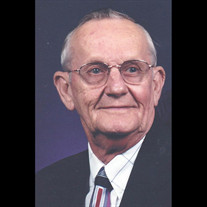 Dale Virgil Johnson was born in Shickley, Nebraska on October 9th, 1931 to Reuben and Winnie (Killion) Johnson and passed away December 16, 2019 in Hebron, Nebraska at the age of 88 years, 2 months, and 7 days. Dale graduated from Shickley High School in 1948 and attended Hastings College. Dale entered the United States Airforce on May 22, 1951 and served at McClellan Air Force Base near Sacramento, California before being honorably discharged on May 21, 1955. He returned to Shickley, Nebraska after his service and worked for Don Barney Well Drilling until 1957. He then began his long-term career with the ASCS office in Geneva retiring in 1986 after being County Executive Director for many years. Dale married Beverly Witt on June 16th 1957. To this union 3 children were born: Debra, Rick and Kurt. Dale and Bev were long time members of the Shickley United Methodist Church. Dale was also an active member of the Shickley American Legion Post 164. He was presented a Quilt of Valor on November 11, 2016 for his service. Upon retirement, Dale was able to spend time doing some of his favorite activities; golfing, fishing, gardening, and spoiling his grandchildren. He played many golf courses in the surrounding area and looked forward to the annual Johnson Family Golf Tournament. Dale achieved every golfer’s dream on April 1st, hitting a hole -in-one on hole number 4 at the Hebron Country Club with no witness to confirm. He also made his goal to play a round of golf each month of the year. In 2000, Dale and Beverly moved to Beatrice, Nebraska, where they became members of the Centenary Methodist Church. They enjoyed their neighbors in Flowing Springs and going for coffee at the YMCA. In 2010, Dale became a resident of Courtyard Terrace in Hebron. He played pool every chance he got and never missed a Thirsty Thursday or 3 p.m. ice cream social. Dale was preceded in death by his wife of 53 years, Beverly; father Rueben Johnson and mother Winnie Retland; brother Warren (Dick) Johnson and wife Marge; parents-in-law Delbert and Lucille Witt; and brother and sister-in-law Jerry Witt and wife Hazel. Those left to cherish his memory include his daughter Debra (Deb) Pope and husband Craig of Hebron, Nebraska; sons Rick Johnson of Lincoln, Nebraska and Kurtis (Kurt) Johnson and wife Carmen of Seward, Nebraska; six grandchildren Justin Pope of Hebron, Nebraska, Jaime Pope and friend Dave Eurek, Bryan Johnson, and Matthew Johnson and friend Richelle Miller, Devon Luebbe and husband Cade, and Dana Johnson; five great-grandchildren Callie and Grayson Pope, Mac, Watson and Lexton Luebbe; sisters Jacquelyn (Jackie) Lund of Lincoln, Nebraska and Clara Mae (Connie) Dishington and husband Rodger of Redondo Beach, California; brother-in-law Dennis (Dennie) Witt and wife Sherry of Sacramento, California, and Joseph (Joe) Witt and wife Carol of North Carolina; and many nieces, nephews, and friends. A Funeral Service for Dale was held on Saturday, December 21, 2019 at 10:00 a.m. at the United Methodist Church in Shickley, Nebraska. Pastor Martin Leeper officiated the service. Marti Alfs accompanied the congregation in the singing of “How Great Thou Art” and “Hymn Of Promise.” Carmen Johnson also provided special music, “Daddy’s Hands” during the service. Pallbearers for the service included Justin Pope, Jaime Pope, Matthew Johnson, Cade Luebbe, Devon Luebbe, and Dana Johnson. Interment was held in the Swedish Cemetery following the Funeral Service. Military Honors were provided by the Shickley American Legion Post 164 and the Offutt Air Force Base Honor Guard. Farmer & Son Funeral Home was in care of the arrangements and online condolences can be left at www.farmerandsonfuneralhome.com. Memorials are suggested to the 50 Flags Veteran’s Memorial, PO Box 193, Shickley, Nebraska 68436.

Dale Virgil Johnson was born in Shickley, Nebraska on October 9th, 1931 to Reuben and Winnie (Killion) Johnson and passed away December 16, 2019 in Hebron, Nebraska at the age of 88 years, 2 months, and 7 days. Dale graduated from Shickley... View Obituary & Service Information

The family of Dale V. Johnson created this Life Tributes page to make it easy to share your memories.

Dale Virgil Johnson was born in Shickley, Nebraska on October...