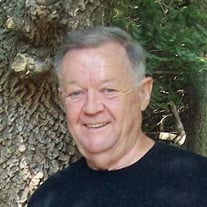 Funeral services for Dale will be held on Wednesday, March 30, 2016 at 10:30 AM at Farmer & Son Funeral Home in Geneva, NE with Father Rudy Oborny conducting services. Visitation will begin on Tuesday, March 29, 2016 from 1:00 PM - 8:00 PM with Dale's family being present from 5:00 PM - 7:00 PM to greet family and friends. Memorials are to be directed to Dale's family for a later designation. Dale Edward Wilkening, 69, of Bruning, NE, died unexpectedly Wednesday, March 23rd in rural Bruning. He was born August 26, 1946 to Edward Wilhelm August and Alma Rebecca Margaret (Finke) Wilkening in Geneva, Nebraska. He graduated from Bruning High School and served in the Navy from 1964-1968. On May 11, 1969 he married Patricia Brady and to them three daughters were born. He spent much of his life working at and managing grain elevators in the surrounding area. Dale loved sports. When his daughters were young the whole family could be found at the softball field most summer nights. During the school year Dale would be sitting in the bleachers cheering on the girls with a loud, “That’s my kid!” He especially loved the Huskers and instilled that Nebraska pride in his daughters. He also loved his garden. Digging potatoes was like a treasure hunt to Dale, excitement with each potato he uncovered. He would often call someone just to share that first crunch of a nice, crisp radish straight from the garden. Dale found great contentment in helping those around him who needed help. As that became more difficult for him, he missed it very much. Dale is survived by his three daughters, Penny (Devin) Doremus, Jennifer (Travis) Hinrichs, and Julee (Martin) Borgerding; eight grandchildren, Dorian, Delaney, Deighton and Diara Grace Doremus, Samantha and Brett Hinrichs, Logan and River Borgerding; two sisters, Lola Johnson and Nancy Swanson; a sister-in-law, Linda Wilkening and many loving nieces, nephews, and extended family. He was preceded in death by his parents, his brother Roger, and his sister Kathy.

The family of Dale Edward Wilkening created this Life Tributes page to make it easy to share your memories.

Funeral services for Dale will be held on Wednesday, March 30,...

Send flowers to the Wilkening family.