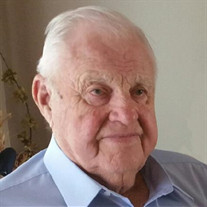 Funeral service for Dallas will be 10:30 a.m. Saturday, April 15, 2017 at the St. John's Lutheran Church in Ohiowa, Nebraska, with Pastor Jim Germer and Pastor Judy Nuss officiating. Graveside service will follow in the Ohiowa Public Cemetery. Visitation will begin Friday at 1 pm until 8 pm with family greeting friends from 5 to 7 at the Farmer & Son Funeral Home in Geneva, Nebraska. Memorials are directed to the St. John's Lutheran Church or the Ohiowa Public Cemetery Dallas Lee Mussman was born to Henry E. and Emma (Pfingsten) Mussman on March 6, 1926, at Tobias, NE, and passed away in Lincoln, NE, on April 11, 2017, at the age of 91 years, 1 month, and 5 days. He was one of two children in the family. Dallas was baptized and confirmed at St. John’s Lutheran Church, Ohiowa and graduated from Ohiowa High School in 1943. Farming was his first love until he met the “damn little pest” who lived down the road and tagged along with him and her brother. He eventually decided she wasn’t so bad and married Claire Ann Waterman on August 15, 1948. They spent their life together and were blessed with five children. In 1994, he and “Dolly”, as he lovingly called Claire Ann, began spending their winters in Mission, TX, where they made many friends and created many memories. In 2002, Dallas and Claire Ann, with the help of their family, built their home and moved to Geneva where he spent hours grooming his plush lawn. Dallas returned home for the farming season each year. He loved being out on the farm helping where he could. He was always there to run the grain cart during harvest. His final harvest was in 2016 at the age of 90. Dallas was a faithful, life-long member of St. John’s Lutheran Church. He served on the Ohiowa Cemetery Board for 45 years and was diligent in the upkeep of the cemetery. He was a member of the Ohiowa Chamber of Commerce and helped organize the Ohiowa Diamond Jubilee in 1962. He was also a member of the Ohiowa Rural Fire Department for many years. Dallas was a family man and was always there for his family. He loved to cook and try new recipes, and he taught Claire Ann how to cook after they got married. He loved spending time with his children and grandchildren fishing, camping, and going for ice cream. Dallas loved life and knew how to have fun. His infectious laugh drew people to him. Preceding him in death were his parents, his son Lyle, his grandsons Richard “Rick” Myers and Bryant Mussman, his older brother Cyrus, brothers-in-law Wilhelm Waterman and Herman Endorf, sisters-in-law Helen Lammersfeld and Helen “Cookie” Rathjen, and many other relatives and friends. He is remembered by his wife of over 68 years Claire Ann, daughters Helen (Lowell “Butch”) Myers and Marjorie Raymond; sons Rex (Lynn) Mussman and Brian “BJ” (Wendy) Mussman; grandchildren Anna “Annie” (Rod) Manley, David Ramsey, Chris and Henry Mussman, Julia Ramsey and Cindy Myers; great-grandchildren Jenelle Ramsey and Brantley Mussman; sisters-in-law Roberta Endorf and Gracie Mussman; brothers-in-law Robert (Kathy) Rathjen and Donald Lammersfeld; cousins, nieces, nephews, and friends including the many friends he made while wintering in Texas.

The family of Dallas L. Mussman created this Life Tributes page to make it easy to share your memories.