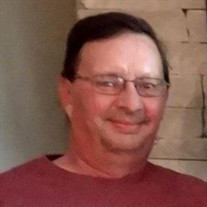 A Private Family Funeral Service for Daniel will be held on Tuesday, January 12, 2021 at Farmer & Son Funeral Home in Geneva, Nebraska with Vicar Tim Stacy presiding. A Livestream Video of the funeral service will begin at 10:30 a.m. on Farmer & Son Funeral Home's Facebook Page. No Visitation will be held. Private Family Graveside Services will be conducted at the Geneva Public Cemetery in Geneva, Nebraska. Memorials are to be directed to the Star Of Health - Fillmore County Hospital, In Memory of Daniel L. Ackland,1900 F Street, Geneva, NE 68361. To view the Livestream Video you can go to Farmer & Son Funeral Home's Facebook Page or in your search engine type @friendlyfuneraldirectors and click the link to Farmer & Son or click this link https://www.facebook.com/friendlyfuneraldirectors/Funeral and it should direct you to our Facebook Page. Daniel Lee Ackland was born January 3, 1961 to Robert Lee and Phyllis Suzanne (Reichert) Ackland at the Thayer County Hospital in Hebron, Nebraska. He passed away January 8, 2021 at his home at the age of 60 years. Dan was baptized at the United Methodist Church in Geneva and confirmed at Prince of Peace Lutheran Church in Geneva. He attended school in the Geneva Public School system with the class of ’79. Dan’s mother died in an accident when he was 6 years old. Bob later married Joan Buhr who also had a son. The boys had a lot of fun on the farm with their pets and toys. Bob built them a diving board at one of the irrigation pits. Many days were spent with the brothers, neighbor kids and cousins swimming riding motorcycles/ATVs exploring the irrigation roads and pasture. They also went “fishing” on the North corner. Joan was known for her “cowpie” chocolate chip cookies and other baked goods, which were enjoyed by all the boys and their friends. July of 1980, Dan married Tamara Weis. To this union 2 sons were born. Andrew Scott and Brett Michael. Dan was a free spirit and did many different things. He loved cars and tinkering with them. Through the years he did auto body work having Rainbow Body as one of his ventures. He worked for the Harvestore and had a dirt moving business for a time. He also had a business called Karma Creek Metal Art. His last job was applying a bi-product from Bioiberica on farmers’ fields. Dan and his dog, Pepsi moved to an acreage near Geneva in October of 2013. He really enjoyed the abundant wildlife. Dan was preceded in death by his mother, Phyllis. He is survived by his special companion Pepsi, father, Robert and stepmother, Joan. His sons, Andrew (Melanie) and their children Kayla, Abigail and Claire of Sullivan, Missouri and Brett of Rolla, Missouri and his children Kyra, Taylor and Chase. Brothers Steve (Jeanne) and Gene (Beth) and step brother Tony Buhr. Nephews, Niece and other relatives and friends.

A Private Family Funeral Service for Daniel will be held on Tuesday, January 12, 2021 at Farmer & Son Funeral Home in Geneva, Nebraska with Vicar Tim Stacy presiding. A Livestream Video of the funeral service will begin at 10:30 a.m. on Farmer... View Obituary & Service Information

The family of Daniel L. Ackland created this Life Tributes page to make it easy to share your memories.

A Private Family Funeral Service for Daniel will be held on Tuesday,...

Send flowers to the Ackland family.