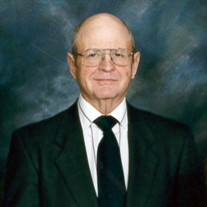 Daniel Gene Swartzendruber was born November 30, 1930 on a farm near Shickley, Nebraska, and passed away January 10, 2019 at the age of 88 years, one month, and 11 days. He was the youngest of seven sons born to Lewis and Katie {Troyer} Swartzendruber. His older brothers were Wayne and Lester, who died as infants, and Virgil, Jay, Clyde, and Titus. Dan grew up on the farm and attended country school District 69, graduating from the eighth grade in 1944. He then attended Shickley High School and graduated as a Senior in 1948. He then pursued a career in farming, which became his life long occupation. Working the land, seeing the seasons change from planting, to growing, to harvest gave him great satisfaction and joy. Dan accepted Jesus as his Personal Savior as a teenager and was baptized in the Salem Mennonite Church at Shickley, Nebraska. He became a lifelong, faithful, active member, serving as sponsor for the MYF group, and he served many terms as Primary Sunday School Superintendent. Only illness or bad weather kept him from attending church every Sunday. His faith in Christ grew stronger as he grew older, and knowing that everyone has “an appointment” to meet the Creator, he looked forward to an eternity in Heaven with his Lord and loved ones gone on before. In November of 1952 Dan was drafted and entered into a two year term of alternative IW Service, working in the morgue at Denver General Hospital , which was also the Coroner’s Office for the city and county of Denver. He worked as an assistant to the Pathologists performing autopsies. He found the work interesting and educational. In November of 1953 Daniel was married to the neighbor girl, Madonna Steider. Together, they lived in their first home, a 27 foot mobile home at 1525 Eaton Street in Denver, Colorado where he finished out his term of Service. Here they were blessed with the birth of their first son, Steven in Feb. 1955. In March of 1955 they returned to Shickley. They moved on to the farm of Madonna’s parents, who had just moved into Shickley. Here he continued his occupation of farming, and he lived at this same location the rest of his life. He started out with the purchase of a used F20 tractor and a little other equipment. The first years were a little hard as he worked hard farming, raising chickens, hogs, and milked cows, but times got better after his Uncle Roy got him started raising turkeys, and later the crops yielded more with irrigation. A son, Paul joined the family in Oct. of 1956, followed by David in May of 1962 and Jonathan in September of 1964. His great delight was having his family gather together. Four sons and their spouses, nine grandchildren, 15 great-grandchildren, and 4 great great grandchildren made a close family in a small house at “get togethers”, and they all loved every minute. As the family grew, they met in fellowship halls. In December of 2018 he enjoyed the family Christmas party with over 40 people in attendance. Dan loved his grandchildren dearly and was interested in all their school and church activities. He loved hearing the tales about hunting and fishing and enjoyed the pictures they shared with him. He was concerned about them in every way, and he prayed that they would continue to grow in their faith in God, and rejoiced knowing that eternal life awaits in Heaven for all who accept Jesus as their Savior. Dan was preceded in death by his parents, Lewis and Katie Swartzendruber; his parents in law, Lee and Emma Steider; brothers and sister-in-laws, Wayne, Lester, Virgil and wife, Bernetta; Jay and wife, Ruth; Clyde, and Titus and wife, Lucille; brother-in-laws Lester and Kenneth Steider; and sister-law, Bernice Steider. Dan and his wife, Madonna celebrated 65 years of happy marriage in November of 2018. They enjoyed traveling through many states, and they also enjoyed a trip to Taiwan, China, Hawaii, and Alaska. He is survived by his wife, Madonna of Shickley, Nebraska; brother and sister-in-laws: Lowell and Bertha Steider of Geneva, Nebraska, Delmer and Eva Steider of Denver, Colorado, and Leonard and Janice Steider of Hesston, Kansas; sons and daughter-in-laws, Steve and Gina, Paul and Debra, all of Shickley, Nebraska, David and Faren of Denver, Colorado, and Jon and Linda of Bruning, Nebraska; Grandchildren and spouses: Richard and Kristen of Carleton, Nebraska; Mike and Becky of Geneva, Nebraska, Katie and Ken Keber and Karen and Dustin Dohrman of Lincoln, Nebraska, Dan and Erin Swartzendruber of LaVista, Nebraska, Krista and Ryan Hamburger of Shickley, Nebraska, Jacob and Joshua Swartzendruber of Bruning, Nebraska, and Prudence and Matt Behmer of Hoskins, Nebraska; 15 Great grandchildren: Kaleb Stahr, Kynsli and Dathan Dohrman, Torrence, Korbin, Elijah, Paxton, Nash, and Jackson Swartzendruber, Haylee Hamburger, Courtney, Bailey, and Ethan Behmer, and Ryan and Jordan Keber; Great-great-grandchildren: Harley Cheney, Hunter Hendrickson Preston Herbolshiemer, Kori Barg; 20 nephews and nieces and many other relatives and friends. A Funeral Service for Dan was held on Monday, January 14, 2019 at 10:30 a.m. at Salem Mennonite Church, rural Shickley, Nebraska. Pastor Shawn Nolt officiated the service. Deb Jaberg accompanied the congregation in the singing of “When Peace Like A River” and “Amazing Grace.” The Salem Mixed Octet performed “Together” and “Some Sweet Day.” Pallbearers for the service included Joshua Swartzendruber, Jacob Swartzendruber, Richard Swartzendruber, Michael Swartzendruber, Dan Swartzendruber, and Ryan Hamburger. Interment was held in the Salem Cemetery following the Funeral Service. Farmer & Son Funeral Home was in care of the arrangements and online condolences can be left at www.farmerandsonfuneralhome.com. Memorials are suggested to the Living Water Rescue Mission in York, Nebraska.

Daniel Gene Swartzendruber was born November 30, 1930 on a farm near Shickley, Nebraska, and passed away January 10, 2019 at the age of 88 years, one month, and 11 days. He was the youngest of seven sons born to Lewis and Katie {Troyer} Swartzendruber.... View Obituary & Service Information

The family of Daniel G. Swartzendruber created this Life Tributes page to make it easy to share your memories.

Send flowers to the Swartzendruber family.