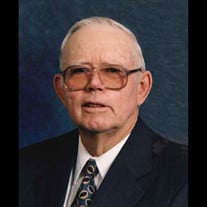 Darien Eugene Thomsen was born January 16, 1926 to Emil & Dora (Christensen) Thomsen on the family farm 3 miles west of Cordova, Nebraska. He passed away on October 2, 2020 at the Fillmore County Hospital in Geneva, Nebraska at the age of 94 years, 8 months, and 17 days. Darien was baptized April 11, 1926 at the Danish Lutheran Church in Cordova. He grew up on farms in York & Fillmore County through the 8th grade. He attended high school in Exeter and graduated in 1943. Darien worked at various jobs after graduation including driving a truck working wheat harvest, at the Burlington railroad yard in Lincoln, Nebraska and at the Fairmont Airbase. He was united in marriage to Betty Sluka on January 30, 1949 at the Grace Evangelical Lutheran parsonage in Geneva with the Rev. D. Grummert officiating. Because of the extreme snow that winter, only four people could attend the wedding. Darien then started farming and lived on the same farm until he moved to Heritage in 2012. He was proud of the work he did on his own to improve the farm through the years. Darien liked people. He liked to tease and always had a joke or a puzzle to have you try to figure out. In his younger years, he liked to hunt and fish. He also liked to do wood working and making things for people. He enjoyed travelling and visiting family. After the children were grown, he and Betty travelled many winters to Arizona to visit two of his uncles and aunts who spent winters there. He and Betty liked to entertain too. Besides holidays with family, there were many card parties with friends. In the early years, everyone had children at home so there were usually more kids than adults at these parties. The kids would play together or play the card game, spoons. What a noisy bunch. Since no one could attend their wedding on account of snow, they had a big celebration on their 25th and 50th wedding anniversary. Their 50th anniversary was on a particularly warm day. Darien loved to go to garage sales and auctions, and he had many collections. More than anything else, he loved his family and friends. He always enjoyed visits with his grandchildren and in the later years his great grandchildren. Darien’s family said he was like a cat with 9 lives because he had some close calls through the years. The 9 passed by, they knew he was a man with a lot of experiences that kept his guardian angel busy. Darien was a member of the Fairmont Community Church in Fairmont, Nebraska. He was preceded in death by his parents; brother Dwaine Thomsen; wife Betty Thomsen; son Steven Thomsen; daughter Gayla Probasco; granddaughter Kari Probasco; and brothers-in-law Paul Bulwan and Irvin Sluka. He is survived by his son Gene & Connie Thomsen of Lincoln, Nebraska; son-in-law George Probasco of Arapahoe, Nebraska; sister Dolores Bulwan of York, Nebraska; sister-in-law Olga Sluka of Geneva, Nebraska; grandchildren Todd & Heather Probasco of Fairmont, Nebraska, Ryan & Lindsay Probasco of Broomfield, Colorado, Erin & August Portz of Appleton, Wisconsin, Jennifer Thomsen of Omaha, Nebraska, Jason & Laura Thomsen of Lincoln, Nebraska; great grandchildren Grace, Tripp, & Daniel Probasco of Fairmont, Nebraska, Aynslea & Delaney Portz of Appleton, Wisconsin, Avery, Brooke, Haley, & Blake Thomsen of Lincoln, Nebraska, Harper Probasco of Broomfield, Colorado; and nieces, nephews, cousins, and many friends. A Funeral Service for Darien was held on Tuesday, October 6, 2020 at 10:00 a.m. at the Fairmont Community Church in Fairmont, Nebraska. Pastor Seungli You officiated the service. Nancy Jo Galusha accompanied Mic Goc who sang “Where No One Stands Alone” and “The Narrow Trail.” Pallbearers for the service included Jason Thomsen, Roy Bulwan, August Portz, Jeff Thomsen, Todd Probasco and Ryan Probasco. Interment was held in the Greenwood Cemetery, York, Nebraska at 1:00 p.m. on Tuesday, October 6, 2020. Farmer & Son Funeral Home was in care of the arrangements and online condolences can be left a www.farmerandsonfuneralhome.com Memorials are suggested to the Fairmont Community Church.

Darien Eugene Thomsen was born January 16, 1926 to Emil & Dora (Christensen) Thomsen on the family farm 3 miles west of Cordova, Nebraska. He passed away on October 2, 2020 at the Fillmore County Hospital in Geneva, Nebraska at the age of... View Obituary & Service Information

The family of Darien E. Thomsen created this Life Tributes page to make it easy to share your memories.