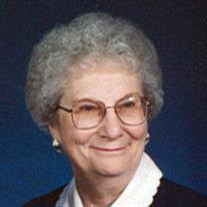 Funeral services for Darlene will be held on Saturday, February 4, 2017 at 11:00 a.m. at the United Methodist Church in Milligan, NE with Pastor Brad Barrows officiating. Visitation will be held on Friday, February 3, 2017 from 2:00 p.m. until 8:00 p.m. with family greeting the public from 5:00 p.m. through 7:00 p.m. at Farmer & Son F.H. - Kotas Chapel in Milligan, NE. Graveside services will be conducted from the Bohemian National Cemetery. Memorials are to be directed to the Milligan United Methodist Church or Milligan Fire & Rescue. Darlene Agnes Krejdl was born to Frank and Agnes (Kuss) Becwar on November 29, 1926, at home, on a farm near Exeter, Nebraska. She passed away on January 31, 2017 at Bryan Medical Center in Lincoln, Nebraska at the age of 90 years and 63 days. Darlene attended Rural School District #5 through 8th grade, and then attended Exeter High School, graduating in 1943. After graduating from high school, Darlene taught at Rural School Districts #5 and #6. Later in life, she was a part time cook at LB Inn and Bunkers Restaurant. Darlene married Emil Krejdl of Milligan, Nebraska on September 16, 1947 in Crete, Nebraska. To this union were born two daughters Connie Lee and Charlene Rae. When they were first married, they lived on a farm near Tobias, Nebraska, later moving to a farm 1.5 miles southeast of Milligan. In 1981, they built a home in Milligan, where they lived for almost 36 years. Darlene was a member of the United Methodist Church of Milligan, United Methodist Women, Pythian Sisters, Milligan American Legion Auxiliary Post 240 (she was honored as a member of Good Standing for 70 years on September 15, 2016), ZCBJ Lodge, and the Senior Citizens Club. Darlene enjoyed visits with her family, neighbors and friends. She loved her home, tending to her flowers, especially the roses, growing a garden, canning, and baking. Her grandchildren enjoyed her delicious rolls and kolaches. She was preceded in death by her parents Frank and Agnes Becwar, her in-laws Frank and Josie Krejdl, her brother Ernest Becwar, brother-in-law George Cruse, and niece Barbara Nunnencamp. She is survived by her husband of 69 years Emil (Bucko); daughters Connie (Chuck) Stevens, and Charlene (Steve) Friesen of Lincoln, Nebraska; 7 grandchildren Sheila Stevens of Atlanta, Georgia; Kelly (Allen) Matsuda of Wellington, Colorado; Kendra (Ryan) Gerlach of Holland, Michigan; Kevin (Krista) Stevens of Lincoln, Nebraska; Jarod Skrivanek of Denver, Colorado; Jeffrey (Carmen) Skrivanek of Lavista, Nebraska; and Tyler Skirvanek of Denver, Colorado; and 7 great-grandchildren Chloe and Macy Matsuda, Evan and Chase Gerlach, Treyton and Zachary Stevens, and Haley Skrivanek; sisters-in law Frances Becwar of Exeter, Nebraska and Mildred Cruse of Fairmont, Nebraska; nephews and their families, Larry and Jack Becwar, and Marc Cruse, and numerous cousins.

Funeral services for Darlene will be held on Saturday, February 4, 2017 at 11:00 a.m. at the United Methodist Church in Milligan, NE with Pastor Brad Barrows officiating. Visitation will be held on Friday, February 3, 2017 from 2:00 p.m.... View Obituary & Service Information

The family of Darlene Agnes Krejdl created this Life Tributes page to make it easy to share your memories.

Funeral services for Darlene will be held on Saturday, February...

Send flowers to the Krejdl family.