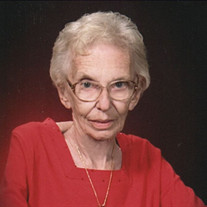 Funeral services will be held at the Prince of Peace Lutheran Church in Geneva on Wednesday, September 10, 2014 at 10:00 AM. Burial will take place in Geneva Public Cemetery following the service. Public visitation will be at Farmer and Son Funeral Home starting on Tuesday, September 9, 2014 from 1:00 PM to 8:00 PM. Memorials are suggested to the Family for a later designation. Darlene Laura Loontjer was born to John and Lydia (Bonin) Garrels on February 8, 1932 in Hebron, Nebraska, and passed away September 6, 2014, at the Fillmore County Hospital in Geneva, Nebraska at the age of 82 years, 5 months, and 29 days. She was one of two children in the family. She was baptized March 13th, 1932 at Grace Lutheran Church in Hebron, Nebraska. She attended Hebron High School graduating in 1950. She worked in Hebron for the Bill Svoboda Insurance Agency as a secretary waiting for Lawrence to return from Japan where he was stationed during the Korean War. Darlene was married to Lawrence Reinhard Martin Loontjer at Bethlehem Lutheran Church in Kiowa, Nebraska on April 5, 1953 and to them three children were born. They were married for fifty-seven years first living in Hebron, Nebraska, where Darlene continued working for Bill Svoboda. They lived in Hebron for thirteen years before moving to Geneva, Nebraska in 1966 when Lawrence accepted a job working for Gambles in Geneva. While in Geneva, Darlene worked as an accounts receivable representative and administrative assistant at the Fillmore County Hospital. She would work for the hospital for thirty-five years before she retired. She also found time to work for the family at Gambles when Lawrence and Glen took over the business after Vaughn Fulton’s retirement. She would continue to work at the store until, upon Lawrence’s death, she retired. Darlene was an active member of Prince of Peace Lutheran Church working on many committees and taking an active role in WELCA, the church’s women’s organization. She was also actively involved in the community and was a past-president of the Geneva Women’s Club. Through her association with this club, she would become instrumental in the raising of funds for a new chapel for the Youth Rehabilitation and Treatment Center (YRTC). She would later be recognized for being an original incorporator and director for twenty-four years of the Chapel of Hope at the center, something she took extreme pride in. Darlene was also an active member of the Geneva Volunteer Fire Department working as an emergency medical technician (EMT) before retiring due to age. Darlene was also known for the beautiful wedding and birthday cakes she made as well as the beautiful crocheted blankets she made. She was above all a care giver to her husband and her family. She was a proud mother and a loving grandmother who enjoyed spending time with her children, grandchildren and great-grandchildren. She was preceded in death by her husband, Lawrence; her parents, John and Lydia; her brother, Quentin Garrels, and two great-grandchildren, Connor and Colton Carson. She is survived by her two daughters, Mrs. Roger (Marilyn) Paustian and Mrs. Scott (Yvonne) Carson of Omaha, Nebraska and her son, Glen and daughter-in-law, Lori of Geneva; seven grandchildren, Andrea Seitz, Wendi McDowell, Kyle Paustian, Chase Carson, Cara Carson, Meg Loontjer, and Tyler Loontjer, and twelve great-grandchildren, Michael and Daniel Seitz, Alex and Cody McDowell, John, Kyra, Maria, Jeremiah, Nathanial, and Valiere Paustian, and Carter and Charlotte Carson.

Funeral services will be held at the Prince of Peace Lutheran Church in Geneva on Wednesday, September 10, 2014 at 10:00 AM. Burial will take place in Geneva Public Cemetery following the service. Public visitation will be at Farmer and Son... View Obituary & Service Information

The family of Darlene L. Loontjer created this Life Tributes page to make it easy to share your memories.

Funeral services will be held at the Prince of Peace Lutheran...

Send flowers to the Loontjer family.