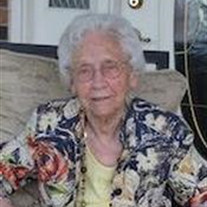 Funeral services for Darlene will be held on Saturday, October 13, 2012 at 10:00 a.m. at the Trinity Lutheran Church in Bruning with Pastor Stuart Sell officiating. Graveside services will follow the funeral in the Trinity Lutheran Cemetery. Visitation will be on Friday from 1:00 p.m. to 8:00 p.m. with family to greet friends from 5:00 p.m. to 8:00 p.m. at the Farmer & Son Funeral Home in Geneva. Memorials are directed to the Trinity Lutheran Church. Darlene Ann (Wilhelms) Norder was born on a farm near Bruning, Nebraska, January 16, 1918 and passed away October 9, 2012 at Thayer County Hospital. She was the third of four children born to Johann Herman Wilhelms and Minnie (Bowman) Wilhelms. She was baptized at Trinity Lutheran Church in Bruning, Nebraska by Pastor C. Bartels on February 3, 1918. She was confirmed at the same church on March 20, 1932 by Pastor J.B. Cronek. She spent her childhood on the family farm south of Bruning, attending rural school District #72 and Bruning Public Schools from which she graduated in May 1935. After graduation, she worked in Lincoln for one year as a maid and a nanny. She soon returned to Bruning and helped her brother Eilert in the Bruning Café, and worked at the Agricultural Adjustment Administration Office in Hebron, Nebraska until her marriage. On December 30, 1941, she and Arnold C. Norder were married at Trinity Lutheran Church by Pastor J.B. Cronek. They were blessed with two children, Patricia Lynn and Timothy Arnold. After marriage, she helped with the farming operation. She and Arnold lived on the farm until 1979 when they moved to Bruning. She lived there until September of 2009 when she became a resident of Courtyard Terrace in Hebron, Nebraska. She was a lifelong member of Trinity Lutheran Church, where she was active in ALCW, participated in Bible study, sang in the choir, and assisted with the junior choir. Her church was a very important part of her life. Dar mostly enjoyed time spent with family and friends, especially her grandchildren. She found great satisfaction in working and was an excellent cook. She was preceded in death by her husband Arnold; her parents Herman & Minnie (Bowman) Wilhelms; her parents-in-law George and Lucy (Kerl) Norder; her brothers Virgil and wife Ardath and Eilert Wilhelms; her brother-in-law Victor Norder; and sister-in-law and brother-in-law Don & Goldene Bumgarner. She is survived by her children Pat & husband Ron Carnes of Wayne, Nebraska and Tim & wife Lois Norder of Bruning, Nebraska; grandsons Neil & wife Adriana Carnes of Lexington, Nebraska and their children Dan, Max, and Isabella, Ted & wife Sheri Norder of Bruning, Nebraska and their children Grant, Caden, and Jaron, Regg & wife Jill Carnes of Crescent, Iowa and their son Gavin McIntosh, and Tony Norder of Bruning, Nebraska; granddaughter Dr. Nicole & husband Nathan Morrissey of De Witt, Nebraska and their children Lucy, Eleanor, and Stella Darlene Morrissey; her brother and sisters-in-law Alton & wife Ardis Wilhelms of Lincoln, Nebraska, Doris Norder Klein of Lincoln, Nebraska, and Lavinia Wilhelms of Bruning, Nebraska; and by many other relatives and friends.

The family of Darlene Ann Norder created this Life Tributes page to make it easy to share your memories.

Funeral services for Darlene will be held on Saturday, October...

Send flowers to the Norder family.