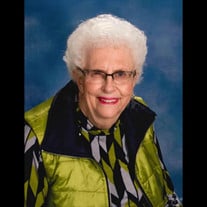 On April 24, 1935 Leona Darlene (Hahn) O’Brien was born at her family home west of Brock, Nebraska to Edward and Gertrude (Boellstorff) Hahn. She attended District 69, which was one mile North of the family farm. Schooling was a family affair as her sister, Norma, was also Darlene’s teacher in the 6th, 7th, and 8th grades. Darlene was baptized at 12 years of age at the Charter Oak Christian Church in Talmage, Nebraska. Darlene attended high school at Brock, Nebraska and graduated in 1953. She attended Peru State College for two years where she earned her Teaching Certificate. Darlene started teaching the 5th grade in 1955 for three years at Shickley Public School. In her free time, Darlene would go for walks around town, and a certain ornery man saw her and decided that he wanted to meet her. After dating 6 months, Tom and Darlene were united in marriage on November 23, 1957 at St. Andrews Catholic Church in Tecumseh, Nebraska. To this marriage one son was born, Patrick James O’Brien, on January 28, 1959. Darlene then took 5 years off from teaching to raise Pat until he was in Kindergarten. Shickley Public School re-approached Darlene and asked her to teach the 5th grade, again, for an additional 5 years. In 1970 the family moved to their current home in Geneva and she started teaching at Geneva Public School as a 6th grade teacher. She also earned her Bachelors Degree in Education from Peru State College, and in 1974, she also earned her Masters Degree in Education. Darlene finished teaching the 6th grade in 1991 and then taught Title 1 from 1992 to 2000. Darlene devoted 40 years of her life to teaching and was a substitute teacher for 9 additional years from 2001-2010, when she officially retired. Besides being a full-time teacher, wife, mother, and grandmother, Darlene loved to garden and canning with her grandchildren. She also enjoyed caring for all her flowers and fertilizing the purple cascading petunias. She enjoyed getting new bird seed and feeders for the birds to enjoy, well except for the Blue Jays and Squirrels. Cooking was one of her many gifts she was always baking pies, cakes, and cooking for the farmers in her life. Although she never shared her complete recipes, she did start giving a few of her secrets away to her grandchildren. Darlene was an active member of the St. Joseph’s Catholic Church and Alter Society. She enjoyed going out to eat with her friends, and being a part of four different Bridge Card Groups. Darlene was also actively involved in Save for America, Book Club, delivered Meals on Wheels, and helped with the local food pantry. She was also an avid Husker fan and enjoyed going to the football games with Tom, Pat, Jan, and her grandsons. Darlene went to see her Savior on November 1, 2021 at Fillmore County Hospital in Geneva, Nebraska after a short illness. Darlene is preceeded in death by her parents; husband Thomas O’Brien; grandson Shawn O’Brien; sister Edna DeJonge; brother-in-laws Leonard Bray, Leonard Thurin, and Bill Cumberland. Darlene is survived by her son Patrick O’Brien and his wife, Jan (Miller) O’Brien of Shickley, Nebraska; grandchildren Alex O’Brien and his wife, Emilee (Doll) O’Brien of Geneva, Nebraska, and Nolan O’Brien of Shickley, Nebraska; sister Norma Bray of Lincoln, Nebraska; sister-in-laws Rosemarie Thurin of Geneva, Nebraska and Margaret Cumberland of Georgetown, Texas; brother-in-law Ed DeJonge of Humboldt, Nebraska; nieces, nephews, many friends and neighbors. A Funeral Mass for Darlene was held on Thursday, November 4, 2021 at 10:00 a.m. at St. Joseph Catholic Church in Geneva, Nebraska. A Rosary was prayed the evening before at the Church. Father Harlan Waskowiak presided over the Services. Colin Wilson provided accompaniment at the Rosary and Charlotte Bumgarner accompanied the congregation at the Mass in the singing of “Here I Am Lord,” “Praise God From Whom All Blessings Flow,” “One Bread, One Body,” “Song Of Farewell,” and “God’s Blessing Sends Us Forth.” The Acolyte for the Mass was John Swanson, the reader was Ann Thurin Carlson, and the gift bearers included Alex, Emilee, Shawn, and Nolan O’Brien. Pallbearers for the Service included Tim Thurin, Dan Thurin, Sterling Bray, Gary Bray, Lynn DeJonge, and Tim DeJonge. A Graveside Service was held at the St. Mary Catholic Cemetery, rural Shickley, following the Funeral Mass. Farmer & Son Funeral Home was in care of the arrangements and online condolences can be left at www.farmerandsonfuneralhome.com Memorials are suggested to the Geneva Fire & Rescue Squads.

On April 24, 1935 Leona Darlene (Hahn) O&#8217;Brien was born at her family home west of Brock, Nebraska to Edward and Gertrude (Boellstorff) Hahn. She attended District 69, which was one mile North of the family farm. Schooling was a family... View Obituary & Service Information

The family of Darlene O'Brien created this Life Tributes page to make it easy to share your memories.

Send flowers to the O'Brien family.