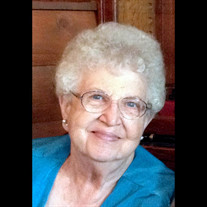 Darlene Ruth Bumgarner Schropfer was born to William Bumgarner and Anna (Paulson) Bumgarner on January 26, 1935 at her parents’ farm by Strang, Nebraska. She passed away at Fairview Manor in Fairmont, Nebraska on January 22, 2020, at the age of 84 years, 11 months, and 22 days, just four days short of her 85th birthday. She was the youngest of six children in the family. Her oldest sister, Leona, assisted in her birth. Darlene attended grade school in Strang until the family moved to Bruning when she was 11 years old. She graduated from Bruning High School as the class valedictorian in 1952. Darlene enjoyed playing volleyball and softball, participating in choir and theater, speech, and church activities. She was honored to attend Girls State in the summer of 1951. After graduation, Darlene enrolled in the Teacher Education program at Doane College. She was an elementary school teacher at District #34 country school near Ohiowa. She left a formal teaching career to take care of her growing family. Later in life, Darlene took classes to become a licensed insurance agent for Modern Woodmen. On August 21, 1954, Louis Schropfer and Darlene were united in marriage at the Bruning Methodist Church. They would have celebrated their 65th wedding anniversary this past August. To this union, five children were born. They raised their family on a farm on the south end of Ohiowa. In 1993, they moved to the home farmstead east of Ohiowa. As a couple, Louis and Darlene enjoyed dancing, playing cards, family gatherings and vacations, and attending their kids and grandkids sporting events and activities. Pasture softball games followed by a wiener roast are fond family memories. Darlene loved to open her home to family and friends. There was always a fresh pot of coffee and homemade bread, rolls, pies, cakes, and plenty of meat and potatoes for any visitor. Her children remember bringing their friends and future spouses home for one of Darlene’s feasts. Darlene was a dedicated farm wife, providing homemade meals at least four times a day. Oftentimes, one of those meals would have to be delivered to the field. Grandchildren will remember Grandma reading to them, playing cards and other games with them, teaching them to cook and bake, and encouraging them in their faith and education. All will remember her kind and caring handwritten cards, frequent phone calls to stay in touch, strong faith, commitment to education, service to the community, and her courage and optimism as she persevered through many health challenges. Darlene was baptized in April of 1947 in Strang. Later, Darlene and Louis were confirmed and joined St. John’s Lutheran Church in 1954 where Darlene served as a Sunday School Teacher, Bible School Leader, and a member of the Lutheran Church Women organization. She also was a member of the Ohiowa Auxiliary, Ohiowa First Responders, Ohiowa Country Neighbors Extension Club, was a 4-H Club Leader, and an advocate for community improvement efforts. She helped plant and take care of flowers at the Ohiowa Park. Darlene was preceded in death by her husband, Louis Schropfer; her parents, William and Anna Bumgarner; sisters Leona (Joe) Deprez and Norma (Virgil) Eppler; brother Homer (Gloria) Bumgarner; brothers-in-law Harold Christensen and Bob Hansen; son-in-law Steve Betka; and granddaughter Jennifer Marie Siert. She is survived by sisters Dorothy Hansen and Delores Christensen; sister-in-law Georgia Schropfer; and children Audrey (Jim) Betka-Mager of Lincoln; Janet (John) Siert of Eldora, Iowa; Robert (Chris) Schropfer of Ohiowa; Mary Schropfer of Lincoln; and Kay (Jay) Knapp of Ord. Grandchildren are Derek (Brooke) Betka; Ryan Betka; and Step Grandchildren Melissa and Jamie Mager; Grandchildren Kristen (Michael) Murphy; Matt (Alina) Siert; Carmen (Tyler) Alexander; Kimberly Schropfer; and Austin, Mitchell and Adam Knapp. Great-grandchildren are Kayleigh, Kelsey, Kaitlyn, and Kierstyn Betka; Claire and Jack Murphy; Micah Siert; and Natalie and Lauren Alexander. Darlene is also survived by numerous nephews, nieces, cousins, neighbors, and friends. A Funeral Service for Darlene was held on Monday, January 27, 2020 at 10:00 a.m. at St. John’s Lutheran Church in Ohiowa, Nebraska. PMA Jim Germer officiated the Funeral Service. Nancy Cradduck accompanied the congregation in the singing of “What A Friend We Have In Jesus,” “How Great Thou Art,” “Amazing Grace,” and “On Eagles’ Wings.” Brooke Betka provided special music and she sang, “In Christ Alone,” and her mother, Marla Maschmann, accompanied her. Brooke Betka also led the great grandchildren in the singing of “Jesus Loves Me.” Pallbearers for the service included Derek Betka, Ryan Betka, Matt Siert, Michael Murphy, Austin Knapp, Mitchell Knapp, Adam Knapp, and Tyler Alexander. Honorary Pallbearers included Kristen Murphy, Carmen Alexander, and Kimberly Schropfer. Interment was held in the Ohiowa Public Cemetery following the Funeral Service. Farmer & Son Funeral Home was in care of the arrangements and online condolences can be left at www.farmerandsonfuneralhome.com Memorials are suggested to the St. John’s Lutheran Church or to the family to be designated to the Rainbow Park in Ohiowa.

Darlene Ruth Bumgarner Schropfer was born to William Bumgarner and Anna (Paulson) Bumgarner on January 26, 1935 at her parents&#8217; farm by Strang, Nebraska. She passed away at Fairview Manor in Fairmont, Nebraska on January 22, 2020, at... View Obituary & Service Information

The family of Darlene R. Schropfer created this Life Tributes page to make it easy to share your memories.