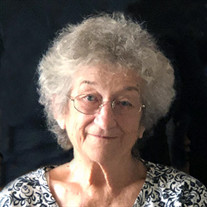 A Memorial Service was held on Wednesday, February 6, 2019, at Farmer & Son Funeral Home - Kotas Chapel in Milligan, Nebraska at 10:30 a.m. with Father Harlan Waskowiak presiding. During the service 5 recorded songs were played, “Hallelujah” by Lindsey Stirling, “How Beautiful” by Twila Paris, “Why Me Lord” by George Jones, “Peace In The Valley” by George Jones and “When The Roll is Up Yonder” by Alan Jackson. Honorary Urn Bearers included Mathew Reavis, Casey Winkler, Mitchell Reavis, Max Reavis, Carly Winkler, Elizabeth Johnson, Evan Johnson, Casen Winkler and Micky Reavis. Graveside Inurnment was held following the memorial service at the Bohemian National Cemetery in Milligan, Nebraska. Memorials were directed to the family to be designated at a later date. Farmer & Son Funeral Home was in charge of funeral arrangements. Darlene was born on December 26, 1932 to Edward J. and Agnes (Votipka) Steinacher of Geneva, NE and passed away Thursday, January 31st in Lincoln, NE at the age of 86. She was baptized and confirmed at St. Joseph Catholic Church in Geneva where she attended church and school until the 8th grade and graduated from Geneva High School in 1950. Growing up she enjoyed helping her mother clean and prepare the church for worship. In 1948, the family of three grew by one when her brother, Rodney joined the family. On February 21st, 1952 Darlene was united in marriage to Delbert Lee Winkler of Fairmont, NE. Later that year as Delbert was preparing to ship out with the US Army, she and a close friend moved out to Paso Robles, CA to spend time with their husbands prior to their deployment to Korea. Upon returning to Geneva, Darlene’s mother was in a horrible accident and Darlene moved home with her parents to care for them and her little brother. It was during this time she developed her caregiving skills and serving others. In 1955, when Delbert returned from the Army they moved onto the family farm six miles south and a quarter mile east of Exeter, NE. It was during this time that she became an active member of Milligan Legion HSSK #240 Post Women’s Auxiliary, VFW Women’s Auxiliary of Geneva, St. Stephen’s Catholic Church Auxiliary in Exeter and she worked at the Dime Store in Geneva. They welcomed a son, Michael in 1956 into the family, daughter Laurie in 1961 and daughter Patti in 1963. Darlene enjoyed farm life, her garden, (where she honed her canning skills to preserve food for the bitter winters) baking, sewing and helping the kids with their 4H projects, helping with Bingo at the Milligan Legion Club. In 1974, the family moved off the farm and to Stromsburg, NE where she once again was able to put her caregiving skills to work at the Midwest Covenant Home until her retirement. Because of her and Delbert’s love of country she became active in Stromsburg American Legion Post #132 Auxiliary, Good Sam’s Camping Club and active in the Stromsburg Senior Center. Darlene loved to crochet, sew, do needlepoint, cook, bake and sit on her front porch read the paper and watch the birds outside. Darlene is survived by her three children: Mike of Hallam, NE; Laurie/Laura Winkler Reavis of Fremont, NE; Patti and her husband Joe Johnson of Lincoln, NE; 6 grandchildren; 2 great grandsons including Carly Winkler and her son Casen of Wilber, Mathew Reavis, his wife Sidney and their son Micky of Ashland, NE, Mitchell Reavis of Boston, MA and Max Reavis along with his fiancé Christine Knadle of Omaha, Elizabeth and Evan Johnson of Lincoln; brother Rodney and his wife Gail Steinacher of Lincoln and their two daughters and their families; sister-in-law Winona (Sally) Stone of Fairmont and her family; along with other grand nieces and nephews, other relatives and cherished friends. She is preceded in death by her parents, husband Delbert, grandson Casey Winkler and brother-in-law Wayne Stone.

The family of Darlene E. Winkler created this Life Tributes page to make it easy to share your memories.

Send flowers to the Winkler family.