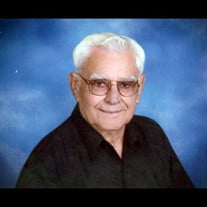 Darrel L. Hughes was born on June 22, 1927 to Ralph and Mildred (Gewecke) Hughes on a farm south of Geneva and passed away in Lincoln, Nebraska on April 23, 2019 at the age of 91 years, 10 months, and 1 day. Darrel was the oldest of ten children. Darrel attended fifth through the eighth grade at District 81 in Geneva Township and graduated from Geneva High School in 1945. Upon graduation, he was drafted and stationed at Fort Leavenworth, Kansas, as a typist. For the last six months of service, he was stationed at the Army Air Force base in Omaha. After being honorably discharged at Fort Sheridan in Illinois, he returned to Geneva and worked at the Heath ice plant. Darrel often talked about delivering 6,850 pounds of ice to homes in Geneva after a hot weekend in July 1947. On June 22, 1947, he married his high school sweetheart Jean Lovegrove and to this union Douglas, Richard (Rick) and Cheryl were born. In the spring of 1948, Darrel's father-in-law Walter Lovegrove wanted Darrel to work for him and some day he could take over the farm. Walter passed away in July 1950, and Darrel and Jean became farmers. Darrel farmed for the rest of his life. Darrel was active in his church and the community. As a charter member of the Geneva Community Grange, he served in all the chairs. In 1955 he was Master of the Grange and the Geneva Grange placed fifth in the nation. Darrel and Jean were honored as Grange Couple of the Year in Nebraska in 1956. Darrel and Jean, along with Warren and Flossie Lefever and Guy and Lorene Brown, assembled the information for "The Fillmore County Story" book. In addition to farming, Darrel was also a meticulous craftsman and carpenter. He built his own home and was involved in numerous building projects, including the construction of the United Methodist Church new sanctuary and education wing. And during his term as president of the Geneva School Board, the new high school was built. He enjoyed woodworking and created many lasting family heirlooms. For Darrel and Jean the spice of life was family and friends and traveling throughout the states and other countries pursuing Jean’s passion for genealogy. They shared 43 years together until Jean's passing on September 12, 1991. Darrel married Evelyn Myers of Geneva on December 22, 1995. For twenty-three years of marriage they made more memories, and through the Ambassador Club, their mutual interest in traveling continued. Darrel said he was a lucky man. He built a life centered around farming, his family and friends: boating, water and snow skiing, dancing, picnics, reunions, and making memories. As the oldest of ten, he was the "hub of the family." "Coming home" was going to Darrel's house. His family remembers him as a hard worker and a devoted husband, father, grandfather and great-grandfather. Darrel supported his grandchildren in all their activities and felt strongly about being a good role model for his family. Darrel was preceded in death by his wife, Jean; his wife, Evelyn; parents Ralph and Mildred; son Douglas; brothers Ronald and Robert; sisters Carol Motis and Shirley Fowler; sisters-in-law Eugenia Hughes, Darlene Hughes, Patricia Hughes and Delores Dand; brothers-in-law Gary Fowler, Mel Motis and Stewart Dand; and nephew Michael Fowler. Darrel is survived by son Rick Hughes and wife Kay; daughter Cheryl Hedden and husband Mitch; brothers Jerry, Kenneth and wife Twila; sisters Genevieve Tanner and husband Jim, Deloris Murrell and husband Fritz, and Sharon Cudaback and husband Roger; grandchildren Prescott Hughes, Sarah Bishoff and husband Jeremy, Melissa Reckewey and husband Joel, Nathan Hughes and wife Ashley, Ryan Hedden and wife Ashley, Adam Hedden and wife Amber, Tanner Hedden and wife Mariah; great-grandchildren Chloe and Alexis Bishoff, Jonah and Lydia Reckewey, Camdyn Hughes, Hudson, Harrison and Hayes Hedden, and Alexa Hedden; step-sons Delton Myers and Delwin Myers and wife Sondra; step-grandchildren Alicia (Myers) Chavez and husband Jimmy, Andrea (Myers) Seggerman and husband Nathan, Jennifer (Myers) Kishkunas and husband Louis, Shane Myers and wife Jill; step-great-grandchildren Daniel and Jacob Seggerman and Kate Kishkunas; nieces, nephews, relatives and friends. A Funeral Service for Darrel was held on Saturday, April 27, 2019 at 11:00 a.m. at the United Methodist Church in Geneva. Pastor Doug Griger officiated the service. Melissa Houchin accompanied Shelbi Palensky in the singing of “Amazing Grace” and “The Lord’s Prayer.” Pallbearers for the service included Ryan Hedden, Adam Hedden, Tanner Hedden, Prescott Hughes, Nate Hughes, Jeremy Bishoff, and Joel Reckewey. Honorary pallbearers included Ashley Hedden, Amber Hedden, Mariah Hedden, Sarah Bishoff, Melissa Reckewey, Ashley Hughes, Jennifer Kishkunas, Louis Kishkunas, Alicia Chavez, Jimmy Chavez, Andrea Seggerman, Nathan Seggerman, Shane Myers, and Jill Myers. Interment with Military Rites was held in the Geneva Public Cemetery following the Funeral Service. Military Rites were performed by the Geneva VFW Samuel J. Marsh Post 7102 and the Nebraska Military Honor Guard. Farmer & Son Funeral Home was in care of the arrangements and online condolences can be left at www.farmerandsonfuneralhome.com. Memorials are suggested to the United Methodist Church, Geneva Rescue Unit, or the Fillmore County Hospital Foundation.

Darrel L. Hughes was born on June 22, 1927 to Ralph and Mildred (Gewecke) Hughes on a farm south of Geneva and passed away in Lincoln, Nebraska on April 23, 2019 at the age of 91 years, 10 months, and 1 day. Darrel was the oldest of ten children.... View Obituary & Service Information

The family of Darrel L. Hughes created this Life Tributes page to make it easy to share your memories.

Send flowers to the Hughes family.