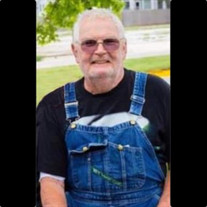 A public Graveside Committal of Ashes for Darwin took place on August 11, 2021 at 11:00 a.m. in the Geneva Public Cemetery. Memorials are suggested to the family. Darwin William Houck was born in Boise, Idaho on July 15, 1942 to Melvin W. & Juanita G. (Magee) Houck. He passed away on July 4, 2021 in at CHI Health St. Elizabeth in Lincoln, Nebraska at the age of 78 years, 11 months, and 20 days. He was the oldest of 6 children in the family. Darwin graduated from Geneva High School with the class of 1962. He entered the Army on March 7, 1964 and was honorably discharged on February 15, 1967. While in the Army, he was stationed in Germany. He also served in the National Guard for 20 years after his discharge. Darwin married Alice Washburn on December 29, 1961 and to this union one child was born: a daughter Sherry. He was then married to Susan Scofield on March 17, 1969 and to this union 4 children were born: a daughter Trina and sons Darwin Jr, Aaron, and Marcus. On August 13, 1987 Darwin was married to Betty Shipferling and they enjoyed almost 34 years of marriage. Darwin worked at Champion Home Builders after leaving the Army. He then began working at Geneva Ford Garage and retired from there in 1995. After he retired, Darwin loved spending time with his family & friends. He enjoyed old cars, rollercoasters, travelling, fishing, and playing cards. Darwin was also active in the ’81 Cruisers Car Club for several years. Darwin was preceded in death by his parents and his brother Keith Houck. He is survived by his wife Betty of Ohiowa, Nebraska; daughters Sherry Gardner of Deltona, Florida, Trina Long and husband Jason of Geneva, Nebraska; sons Darwin Houck, Jr. of Stromsburg, Nebraska, Aaron Houck of York, Nebraska, Marcus Houck of Geneva, Nebraska; step-children Steve Kramer and wife Becky of Western, Nebraska, Johnny Kramer and wife Melissa of Geneva, Nebraska, Laurie Shipps and husband Marty of Fairmont, Nebraska, Kathy Covert of Gresham, Nebraska, Kelly Braca and husband Joe of Geneva, Nebraska; sisters Jan Ells and husband Gene of Hebron, Nebraska, Margaret Taylor and husband George or Ulysses, Nebraska, Fran Alger of York, Nebraska; brother Rick Houck and wife Karen of Kansas; as well as many grandchildren, great grandchildren, aunts, uncles, nieces, nephews and cousins.

A public Graveside Committal of Ashes for Darwin took place on August 11, 2021 at 11:00 a.m. in the Geneva Public Cemetery. Memorials are suggested to the family. Darwin William Houck was born in Boise, Idaho on July 15, 1942 to Melvin W.... View Obituary & Service Information

The family of Darwin W. Houck created this Life Tributes page to make it easy to share your memories.

A public Graveside Committal of Ashes for Darwin took place on...

Send flowers to the Houck family.