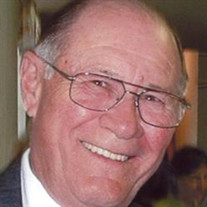 Memorial service will be held on Friday, January 8, 2016 at 10:30 AM at Grace Lutheran Church in rural Ohiowa, NE with Pastor James Sells officiating. Military graveside service with burial of ashes will take place at the Ohiowa Public Cemetery. Memorials are to be directed to Grace Lutheran Church or to the family for a later designation. Daryl D. Sieber, 80, of Waverly, originally of Ohiowa, husband, father, grandpa, and big grandpa passed away at home surrounded by family after a long courageous battle with cancer on Friday, January 1, 2016. He was born on August 1, 1935, on the farm southwest of Ohiowa, NE, to Edward and Nora (Schroeder) Sieber. Daryl Graduated in 1953 from Ohiowa High School. He then worked for NKC Grain Company until entering the Army in 1958 and was stationed at Fort McClellan, AL. On October 22, 1958, Daryl and Betty Murray were married at the Presbyterian Church in Gibbon, NE. He worked in manufacturing for many years and retired from Molex Inc. in Lincoln after twenty-one years. Daryl was a member of the Grace Lutheran Church of Ohiowa and as an avid Ham Operator was a member of the Lincoln Amateur Radio Club. He enjoyed the communications, along with hunting, fishing, learning about history and watching baseball on TV. He especially enjoyed time with family, grandson, Nate Sieber and great-granddaughters and granddogs. Daryl is survived by his wife, Betty, of Waverly; daughter and son-in-law, Sheryl and Bob Martin, Jr.; grandson, Nathan Sieber and great granddaughters, Hope and Eve Sieber of Lincoln; brother and sister-in-law, Gary and Karen Sieber of Prescott Valley, AZ; brother –in-law, Virgil Poore of Bassett, VA and many aunts, cousins and great friends. He is preceded in death by his parents; son, Vaughn Sieber; daughter, Brenda Washington; brother Mervil Sieber and sister-in-law, Ruth Poore.

Memorial service will be held on Friday, January 8, 2016 at 10:30 AM at Grace Lutheran Church in rural Ohiowa, NE with Pastor James Sells officiating. Military graveside service with burial of ashes will take place at the Ohiowa Public Cemetery.... View Obituary & Service Information

The family of Daryl D. Sieber created this Life Tributes page to make it easy to share your memories.

Send flowers to the Sieber family.