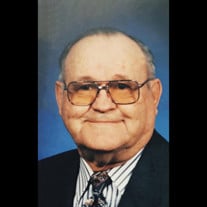 A Memorial Service for Daryl will be held on Tuesday, June 22, 2021 at 11:00 a.m. at the United Methodist Church in Exeter. There will be a private Committal Of Ashes. Memorials are suggested to the family for future designation. Daryl's service will be live-streamed to Farmer & Son Funeral Home's facebook page. You can find our page by searching @friendlyfuneraldirectors or searching 'Farmer & Son Funeral Home Facebook' on your preferred search tool. Daryl Dean Taylor was born on April 24, 1927 to Ray A. and Leona M. (Zwieg) Taylor on the family farm near Exeter, Nebraska and passed away at his home on June 9, 2021 at The Lexington Assisted Living Center in Lincoln, Nebraska at the age of 94. He was one of three children. Daryl went to country school through the 8th grade and then to Exeter High School, graduating in 1944. He served in the Army from September 1945 to November 1946. He was inducted at Fort Leavenworth and was transferred to Fort Bliss. Upon his return home from the Army, he farmed with his dad. On January 10, 1954, he married Shirley A. Rhodes and they lived on the farm north of Exeter, and to them four children were born. In 1989, Daryl and Shirley retired from farming and moved to Cordova, Nebraska. Daryl was a 72-year member of the Cordova American Legion Post 359 and a member of the United Methodist Church in Exeter for 79 years. He served as a 4-H leader for the Four Corners 4-H Club in Cordova, and he was a retired member of the Cordova Volunteer Fire Department. In his earlier years, he raised registered Suffolk sheep and worked as a carpenter at Boren Lumber Company in Exeter during the winter months. Daryl enjoyed working and helping at many sales for Larsen & Associates Auctioneers. He enjoyed golfing and being with his grandchildren and great grandchildren. Daryl was preceded in death by his parents and wife; daughters Lynn Marie Taylor and Cindy Korsakas; and a sister Donna Baller. He is survived by his daughters Sherry Taylor of Lincoln, NE and Kathy Wiemer of York, NE; son-in-law Mike Korsakas of Lincoln, NE; sister Darleene Becker of Lincoln, NE; grandchildren, Michael (Ashley) Korsakas, Mark Korsakas, Mindy Wiemer (Stacy McCandless), Alysson Meyer, Jessica Wiemer, Jacob Wiemer; great grandchildren Jaylin McCandless, Hannah Meyer and Logunn Meyer; many nieces, nephews, and other relatives.

A Memorial Service for Daryl will be held on Tuesday, June 22, 2021 at 11:00 a.m. at the United Methodist Church in Exeter. There will be a private Committal Of Ashes. Memorials are suggested to the family for future designation. Daryl's... View Obituary & Service Information

The family of Daryl D. Taylor created this Life Tributes page to make it easy to share your memories.

A Memorial Service for Daryl will be held on Tuesday, June 22,...

Send flowers to the Taylor family.