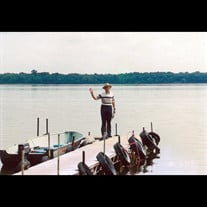 David was born to Guy and Florence (Boden) Portwood on February 2, 1927, in Hastings, NE, one of two children in the family. He passed away on July 14, 2019 at the age of 92. David grew up in Davenport, NE, graduating from Davenport High School with the Class of 1944. He enlisted in the U.S. Naval Reserve in December, 1944, completed his Boot Camp Training at Great Lakes (Illinois) Naval Training Station and went to the Hospital Corp School in San Diego, CA. After graduation, David was transferred to Treasure Island Naval Hospital where he served as a Pharmacist 1st Class until his discharge on August 20, 1946. David graduated from the University of Nebraska- Lincoln with a Bachelor of Science degree in 1950 and then from the University College of Dentistry in 1952. While in college, David was a member of the Sigma Phi Epsilon Fraternity and Xi Psi Phi Dental Fraternity. David married Mary Lou Camp on January 18, 1948, in Davenport. The family moved to Geneva in June, 1952 when David established his dental practice. One of the core values of David's life was service to others and he exemplified that in his church, his many Masonic affiliations, and his generous support of community projects. He was a 67 year member of the First Congregational United Church of Christ, serving as a Sunday School Superintendent, Deacon, and on many Boards, including his beloved Mission and Outreach Committee. David also enjoyed serving as a temporary Lay Minister for area churches and his own church when needed. David was a member of the Order of Eastern Star and of Masonic Lodge #79 in Geneva where he served as Master and in many offices of both organizations as well as additional membership in affiliated Masonic orders- Sesostris Shrine, York Rite, Joppa Commandry, and Naomi Council. David was most proud of receiving the Grand Master's Humanitarian Award for his involvement in the Masonic Order and for his service to his community. David also served on the Geneva Public School Board of Education, during the time period of planning for the new Elementary School. While active in his dental practice, David was also a member of the Geneva Chamber of Commerce. Besides his church and Masonic memberships, David also enjoyed delivering meals for the Geneva Senior Center and, following Mary's death in July, 2007, he enjoyed spending time and eating with others there. Throughout his work years and after retiring from his dental practice in 1999, David most enjoyed traveling with Mary to both family and new destinations, searching along the way for additions to his collection of Big Little Books and Mysteries. He also enjoyed reading, working Crosswords, and playing Jeopardy (in which no one could beat him at the History questions), and most of all, spending time with life-long friends and taking family trips to Lake Andrusia in Minnesota. David was preceded in death by his parents, his brother, Boden Portwood and his beloved wife, Mary Lou. He is survived by his children Linda Portwood Hipp and husband Fred of Hainesport, NJ; Don Portwood and wife, Barbara of Weaverville, NC; Nancy Kohler and husband, Richard of Geneva, NE and Pat Eisenach and husband, Jim of Winston-Salem, NC. Grandchildren Julia (Steve) Hipp-Canson of Bellingham, WA; Jason Hipp of Brooklyn, NY; Matthew Portwood of Minneapolis, MN, Benjamin (Sarah) Portwood of Weaverville, NC; Sarah (Spencer) Kuhl of Kearney, NE; Daniel (Barbara) Kohler of Lincoln, NE; Laurel (Ed) Combs of Brooklyn, NY; David (Kelley) Eisenach of Toronto, Canada; sister-in-law, Jane Portwood of Williamsburg, VA, nieces, nephews, and 10 great-grandchildren. In addition to his family, David will be missed by all those who received his words of encouragement, support, and assistance and those who looked to him as a mentor, role model and friend. A Funeral Service for David was held on Thursday, July 18, 2019 at 10:00 a.m. at the First Congregational United Church of Christ in Geneva. Pastor Stuart Davis officiated the service. Karen Kohler accompanied the congregation in the singing of “For All The Saints” and “My Life Flows On In Endless Song.” A Masonic Service was performed by Geneva Masonic Lodge #79 AF&AM at the conclusion of the Funeral Service. Pallbearers for the service included Matthew Portwood, Benjamin Portwood, Spencer Kuhl, Daniel Kohler, David Eisenach, Tom Novak, Charlie Barbur, Jr., and Victor Smith. Honorary Pallbearers included Julia Hipp-Canson, Jason Hipp, Sarah Kuhl, and Laurel Combs. Interment was held in the Geneva Public Cemetery following the Funeral Service. Farmer & Son Funeral Home was in care of the arrangements and online condolences can be left at www.farmerandsonfuneralhome.com Memorials are suggested to the family for future designation.

David was born to Guy and Florence (Boden) Portwood on February 2, 1927, in Hastings, NE, one of two children in the family. He passed away on July 14, 2019 at the age of 92. David grew up in Davenport, NE, graduating from Davenport High School... View Obituary & Service Information

The family of Dr. David A. "Doc" Portwood created this Life Tributes page to make it easy to share your memories.

David was born to Guy and Florence (Boden) Portwood on February...

Send flowers to the Portwood family.