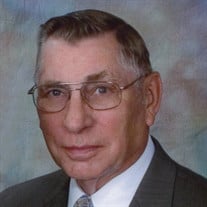 Funeral services were conducted at Trinity Lutheran Church on January 9, 2019, at 10:30 a.m., with Pastor Stuart Sell officiating. Myra Kluck served as organist with Betty Edzards providing a solo of “In the Garden”, the congregation sang 3 hymns; “Beautiful Savior”, “What A Friend We Have In Jesus” and “Amazing Grace”. Pallbearers were Josef Philippi, Ryne Philippi, Paul Philippi, Rick Reinsch, Wayne Houchin Jr., Tim Remmers, Elijah Quinones and Dominic Quinones. Honorary pallbearers were his remaining great grand children Kali, Willow, Brayden, Jackson, Kristopher, Brooklyn and Knox. Farmer & Son Funeral Home was in charge of funeral arrangements. Burial was held at Trinity Lutheran Cemetery. Memorials are to be directed to the family for a later designation. Dean L. Reinsch was born on April 17, 1936 to Ernest J. and Elsie M. Hopken Reinsch at the family home near Strang, NE. He departed this life on January 6, 2019 at Fairview Manor in Fairmont, NE at the age of 82. Dean was baptized on May 3, 1936 at St. Joseph Catholic Church in Geneva. His father died in 1939. His uncle Christ Hopken moved in to help Elsie raise her two sons. Dean attended country school District 49 thru 8th grade and then went to Geneva High School where he graduated with the class of 1953. Dean made friendships during those years that he kept the rest of his life. He married Darlene M. Remmers on December 20, 1957 at Trinity Lutheran Church in Bruning. Shortly after that he approached his very staunch Catholic grandfather, Emil and told him that he planned to join the Lutheran Church. Emil gave his blessing by telling him “It doesn’t matter what church you go to, just that you go to church”. Dean was confirmed on March 15, 1959. Dean and Darlene welcomed a daughter into their life, Kathleen, on November 21, 1958. After graduation Dean went to Omaha to work construction but eventually returned home to begin his career as a printer at The Nebraska Signal. He took a short break from the Signal to be a Star Route carrier, where he carried mail from Bruning to Belvidere to Alexandria to Powell to Fairbury in the morning. He worked at the Fairbury Journal during the day and did a reverse route in the evening. There were many joyous trips along the bottom roads to Fairbury with great stories about the things he saw and did along the way. From 1969 to 1972 Dean ran the Bruning Grocery, but eventually returned to the Nebraska Signal where he worked until retirement in 1999. Dean enjoyed working on and restoring cars. His pride and joy is a 1958 Mercury Turnpike Cruiser. Dean was always busy fixing or building something, including the presses at the newspaper. His one-time editor Tom Huddleson wrote “Dean could fix anything with bubble gum and baling wire”. Dean was a meticulous worker and enjoyed keeping his home, lawn and cars in tip top shape. Dean and Darlene took time in their lives to enjoy life too. They spent many years vacationing and seeing the country. The couple traveled to Mexico, Alaska and Hawaii, but spent most of their time in the warmth of the Southwest, wintering in Mesa, AZ. Dean is preceded in death by his parents and brother Richard. He is survived by his wife of 61 years, Darlene. Daughter Kathleen and her husband Kurt Philippi of Bruning. Three grandsons Josef and wife Pat of Axtell, NE, Ryne and wife Daina of Bruning and Paul and wife Megan of Bruning and nine great grandchildren Kali and Willow Philippi, Elijah and Dominic Quinones, Brayden, Jackson and Kristopher Philippi and Brooklyn and Knox Philippi. He will also be missed by a host of nieces, nephews, cousins and friends.

Funeral services were conducted at Trinity Lutheran Church on January 9, 2019, at 10:30 a.m., with Pastor Stuart Sell officiating. Myra Kluck served as organist with Betty Edzards providing a solo of &#8220;In the Garden&#8221;, the congregation... View Obituary & Service Information

The family of Dean L. Reinsch created this Life Tributes page to make it easy to share your memories.

Funeral services were conducted at Trinity Lutheran Church on...