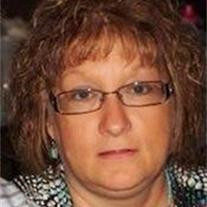 Debra "Deb" Kay Davis entered the presence of her Lord and Savior on Sunday, December 1st, 2013 at her home in Shickley. Born May 3rd, 1963 in Lincoln, Neb., the daughter of Clint and Marilyn Schweitzer. She graduated from Shickley Public School in 1981 and attended Midland Lutheran College and Bethel College. Deb was married to Jim Davis on April 20th, 1985 in Geneva where they lived and had their oldest son Darren. In 1988, they moved to Grand Island where they lived for eight years and had their son Jeremy and daughter Jessica. In 1996, they moved back to Shickley where they had their daughter Delaney. She spent the last 10 years working for the Youth Rehabilitation and Treatment Center in Geneva where she touched countless lives. Deb was a loving daughter, sister, wife, mother, and grandmother. Her selfless love for her family was evident to all who knew her. She enjoyed many things including music, reading, crocheting, making jewelry, and collecting coffee cups (which she was forever misplacing). She was diligently active in her kid's school activities, most recently helping with Delaney's volleyball team and one-act plays. Of late, she loved spending time with her little grandson Mason. Survivors include her husband Jim, Shickley; sons Darren (Mikaela) and Jeremy (Ashley and Mason), Lincoln; daughters Jessica and Delaney, Shickley; parents Clint and Marilyn Schweitzer, Geneva; brother Steve (Lisa) Schweitzer, Strang; sister Tami (Mike), Fairmont; and many nieces, nephews, and friends. Funeral service for Deb will be Friday, December 6, 2013, at 10:30 a.m. at the Evangelical Free Church in Geneva, Nebraska. Public visitation will begin Thursday at 1:00 p.m. until 8:00 p.m. at the Farmer & Son Funeral Home in Geneva. Interment will be in the Geneva Public Cemetery. Memorials are directed to the family for later designation.

Debra "Deb" Kay Davis entered the presence of her Lord and Savior on Sunday, December 1st, 2013 at her home in Shickley. Born May 3rd, 1963 in Lincoln, Neb., the daughter of Clint and Marilyn Schweitzer. She graduated from Shickley... View Obituary & Service Information

The family of Debra K Davis created this Life Tributes page to make it easy to share your memories.

Debra &quot;Deb&quot; Kay Davis entered the presence of her Lord and Savior...

Send flowers to the Davis family.