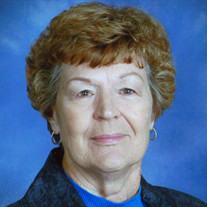 A Funeral Service for Dee will be held on Tuesday, June 19, 2018, at 10:30 a.m., at the United Methodist Church in Geneva, Nebraska with Pastor Michelle Gowin and Kim Dunker officiating. Visitation will be held Monday, June 18, 2018, at Farmer & Son Funeral Home in Geneva, Nebraska, from 1:00 p.m. until 8:00 p.m. with the family present from 5:00 p.m. until 7:00 p.m. Memorials are to be directed to Geneva Senior Center or to the family for a later designation. Graveside Services will be conducted following the funeral service at the Geneva Public Cemetery. Dee Ann (Kasl) Schwisow was born to Victor and Johanna (Rhymes) Kasl on March 16, 1937 at Swanton, Nebraska, and passed away June 14, 2018, at Heritage Crossings Nursing Home in Geneva, Nebraska at the age of 81, following a nine month battle with metastatic colon cancer. The oldest of three children, Dee graduated from Swanton High School in 1954 and continued her education at Doane College, studying education. She met her future husband, Glenn Walter Schwisow, at a dance at Sokol Hall in Wilber, Nebraska. They married on August 15, 1954. Dee started teaching rural school that fall, while continuing her college education during summer breaks. Dee and Glenn had two daughters: Katherine Jo, born September 15, 1960, and Karolyn Ann, born June 28, 1962. In 1967, she began her banking career at the Bank of Swanton. Over the next 32 years, she worked for several owners and trained numerous young bank managers. She retired as Vice President in 1999. Dee enjoyed traveling with her husband in their motor home, especially to Galveston and Port Aransas, Texas, as well as Hawaii and numerous other destinations, often with friends. Dee was always very involved with her community. While living in Swanton, she served in various leadership roles in the American Legion Auxiliary, the United Methodist Church of Swanton, Swanton Community Club, and other organizations. She loved attending her grandsons’ sports and 4-H activities. In 2011, Dee moved to Geneva with her husband, where she quickly became involved in that community. She was active in the Geneva Senior Center, Geneva United Methodist Church, UMW, Mother’s Club, Meals on Wheels, Save for America program for Fillmore Central school children, Quilt Guild, and other activities and functions. Her husband, Glenn, passed away, in 2013. She learned to play bridge, belonging to several bridge clubs. Dee enjoyed gardening and quilting, and won several ribbons at the Fillmore County Fair. She was an avid Husker fan, and rarely missed a televised volleyball or football game, enjoyed even more so with her friends. Dee lived an exemplary life, being of service and helping others. Dee was preceded in death by her husband of 58-years, Glenn, and her parents Johanna and Victor Kasl. She is survived by her daughters and sons-in-law, Katie (Mike) Chaney of Geneva, and Karol (Steve) Chapman of Omaha; brothers and sisters-in-law John (Connie) Kasl of Staplehurst, Paul (Melody) Kasl of Lafayette, OR, Nancy Kasl of Lincoln, and Linda Van Meter of Lincoln; grandsons Brett (Rachel) Chaney of Geneva and Drew Chaney (Samantha Roach) of Geneva; great grandchildren, Braylon Marschman, Grayson Chaney, Trevor Roach, Jackson Chaney, and Brooke Chaney; step grandsons Clayton (Bernadette) Chapman and their children Hudson & Scarlet and Morgan (Rachel) Chapman all of Omaha; nieces, nephews, cousins, and many dear friends.

A Funeral Service for Dee will be held on Tuesday, June 19, 2018, at 10:30 a.m., at the United Methodist Church in Geneva, Nebraska with Pastor Michelle Gowin and Kim Dunker officiating. Visitation will be held Monday, June 18, 2018, at Farmer... View Obituary & Service Information

The family of Dee Ann Schwisow created this Life Tributes page to make it easy to share your memories.