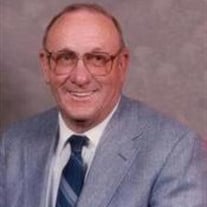 Delphin (Del) C. Jensen was born July 18, 1925, on the family farm near Exeter, Nebraska to Christian and Ann (Johnsen) Jensen, and passed away on March 21, 2013 at the Exeter Care Center in Exeter, Nebraska. Del was baptized at Our Savior’s Lutheran Church in Cordova, Nebraska. He graduated from Exeter High School in 1943. Del joined the Navy in October 1943 as a Seabee. He served 2 ½ years in the South Pacific Admiral T Islands. He received the Asiatic Pacific 1 Star award and the Expert Rifleman’s Badge. After the war he returned home and attended UNL for a semester. On June 29, 1947 he was united in marriage to Elfrieda Erks at St. John’s Lutheran Church in Utica, Nebraska. To this union 4 children were born, Nadine, Clifford, Rodney and Steven. Del worked for Cushman but eventually moved to the family farm north of Exeter, where he farmed and raised his family. Del was a member of Trinity Lutheran Church in Cordova, Nebraska and a lifelong long member of the American Legion He was preceded in death by his parents Christian and Anna Jensen, In laws Dietrich and Minnie E. Erks, sister Lavelle Carlson, brothers-in-law William Erks, Gerald Christoffersen, Arden N. Johnson, and Don Carlson, sisters-in-law Helen Erks, Darlene Erks, Dorothy Erks and nieces and nephews. Del is survived by his wife Elfrieda, sons Cliff Jensen and wife Jeannie, Rod Jensen and wife Carol and Steve “Norbert” Jensen, daughter Nadine and husband Tom Nebelsick, sisters Birdean Christoffersen and Eyvonne Johnson, 7 grandchildren and 2 great grandchildren Services for Del will be at 10:30 a.m. Tuesday, March 26, 2013 at the Trinity Lutheran Church in Cordova, Nebraska. Military Graveside services will be in the Exeter Cemetery. Visitation will begin Monday at 1:00 p.m. until 8:00 p.m. with family greeting friends from 6 until 8 at the Farmer Funeral Home in Exeter. Memorials are directed to the Exeter American Legion Post #218 or the Trinity Lutheran Church in Cordova.

Delphin (Del) C. Jensen was born July 18, 1925, on the family farm near Exeter, Nebraska to Christian and Ann (Johnsen) Jensen, and passed away on March 21, 2013 at the Exeter Care Center in Exeter, Nebraska. Del was baptized at Our Savior&#8217;s... View Obituary & Service Information

The family of Del C. Jensen created this Life Tributes page to make it easy to share your memories.