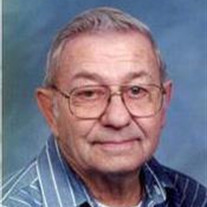 Delbert Lee Winkler, was born to Leo J. Winkler and Nellie (Lovegrove) Winkler on June 6th, 1932 on a farm in Fairmont, NE, and he passed away Friday, November 16, 2012 at 00:43 in Omaha, NE at the VA Hospital at the age of 80 years, 5 months and 10 days. He was raised on a farm near Fairmont, NE and graduated from Fairmont High School in 1950. He was drafted into the Army in 1952 and served during the Korean War. Upon serving in the Korean War, he returned home and married Darlene Steinacher on February 21, 1952 and to them 3 children were born. Delbert, Darlene and family lived on a farm 6 miles south of Exeter, NE and farmed until 1974, when they pulled up stakes and moved to Stromsburg, NE. Delbert drove semi for McBride Transport, then went on to manage the Coop Oil Inc, until the mid 80’s. He retired in January 2012 after 30 years of service at the Rally Auto Parts Store in Stromsburg. Delbert loved his country and his fellow Legionnaires. He was a member of the Milligan American Legion HSSK #240, Geneva VFW Samuel J. Marsh Post #7102, and the Stromsburg American Legion Post #132, for many years. Delbert was recently named Honorary Veteran for 2012 by the Stromsburg American Legion Post #132 where he served as Commander for many years. Delbert also loved to camp and was an active member of The Nebraska Good Sam’s Camper Organization, where he served as State Director for four years. Delbert was preceded in death by his parents, Leo J. and Nellie Winkler, infant sister Margaret Jean, grandson Casey Winkler, brother-in-law Wayne Stone. He is survived by his wife Darlene of 60 years; son Michael Winkler and friend Cindy, and granddaughter Carly Winkler; daughter Laurie and husband Sean Reavis, and grandson’s Mathew, Mitchell, and Maxwell; daughter Patti and husband Joe Johnson, and grandchildren Elizabeth and Evan; and his sister Winona “Sally” Stone. Memorial services were conducted from Farmer & Son Funeral Home in Geneva, NE on Wednesday, November 21st, 2012 at 11:00 a.m. with Fr. Tom Walsh officiating. Father Walsh led the congregation in the singing of “How Great Thou Art,” “I Am The Bread Of Life,” and “Immaculate Mary.” Military Graveside services were held at the Bohemian National Cemetery in Milligan and performed by the Milligan American Legion HSSK Post 240. Memorials are to be directed to the family.

The family of Delbert L. Winkler created this Life Tributes page to make it easy to share your memories.

Send flowers to the Winkler family.