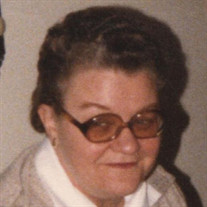 Adella “Della” Mae Hofferber was born to Joseph Henderson Wood and Vera Maire Brown Wood on May 3, 1937, at Orafino, Nebraska and passed away December 28, 2014 at the Fairview Manor in Fairmont, Nebraska at the age of 77 years, 7 months and 25 days. She was one of 3 children in her family. Della attended grade school at Orafino, Nebraska and graduated from Morrill High School. At the age of 14 she worked in the potato fields. When she was 16 years old she went to work at the Morrill Café. Della was married to Robert “Bob” Hofferber of Geneva, Nebraska on July 3, 1957 and to them 2 sons were born. Della worked for the Heath Grocery store, she did cleaning for Webb’s Construction, and Marie Kinder and she even helped Marv Saum pickup and haul garbage. But the job she was probably most noted for was being a waitress and cook for Fran’s Café and Jill’s Sweet Shop. Della enjoyed watching Wheel of Fortune and The Young and Restless, and she was an avid Nebraska Football fan and Kansas City Royal fan. Della was preceded in death by parents Joe and Vera Brown, step dad Lyle Stebbins, husband Bob, son Scott, brother Lyle Woods and sister Lorraine Rupe. She is survived by her son Fred, 4 grandchildren Bob, Scott, Jamie and Amanda, 6 great grandchildren, nieces and nephews, special friends Sue and Kenneth Brown, Sarah and Cliff Rippe, neighbor Dawne Hedden and many friends. Funeral services were conducted from the Farmer & Son Funeral Home in Geneva, Nebraska on Wednesday, December 31, 2014, with Kim Dunker officiating. Casket Bearers were Ralph Graham, Ron Graham, Jim Graham, Jim Boo, Kenny Brown, Gene Brown and Mitch Hedden. Recorded selections for the service were Lord of the Dance and Go Rest High On That Mountain. Interment was in the Geneva Public Cemetery. Memorials are directed to the Geneva Volunteer Fire Department

Adella &#8220;Della&#8221; Mae Hofferber was born to Joseph Henderson Wood and Vera Maire Brown Wood on May 3, 1937, at Orafino, Nebraska and passed away December 28, 2014 at the Fairview Manor in Fairmont, Nebraska at the age of 77 years, 7... View Obituary & Service Information

The family of Della M. Hofferber created this Life Tributes page to make it easy to share your memories.

Send flowers to the Hofferber family.