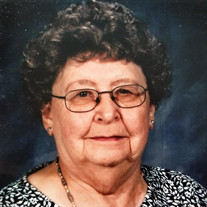 A Memorial Service for Della will be held on Saturday, March 30, 2019 at 11:00 a.m., at the Fairmont Community Church with Pastor Pat Norris presiding. No Visitation - Cremation. Burial of Ashes will be held following the memorial service at the Fairmont Public Cemetery in rural Fairmont, Nebraska. Memorials are to be directed to the Fairmont Community Church, Fairmont American Legion Auxiliary, Fairmont Senior Center or Fairmont Fire Department. Della L. Rose was born to Charles H. Keil and Jane Ann (Lott) Keil on February 27, 1929 at Fairmont, NE., and passed away March 20, 2019 at Hillcrest Shadow Lake Nursing Home in Papillion, NE at the age of 90. She was one of six children in the family. Della’s childhood was spent on a farm north and east of Fairmont. She attended Country School District 27 until she was in 5th grade, when her parents moved to town. Della graduated from Fairmont High School in 1946. As a freshman in high school and during World War 2, she cleaned houses for a few people plus did waitress work at Tony’s Café. She kept up the waitress work after school and as a summer job until she graduated from high school. After graduation she became a Bookkeeper for W.W. Harrington Automotive Company, she kept this job until the Trumble Family purchased the company. She then started working at the Boren Lumber Yard in Fairmont, plus in Exeter when Boren Family owned them. She also was the manager of G. Kay Truck Line Inc. owned by Bill Boren. On May 28, 1947 she married Francis D. Rose of Fairmont. They were married for 53 years and lived their entire married life in Fairmont. Francis died in February, 2000. After Francis returned from World War 2, he went to work for W.W. Harrington Automobile and Trumble Automotive Company. In 1967, Francis and Della purchased the Automotive Business from the Trumble Family. The Crossroads GMC business was owned by both of them until Francis’s retirement in 1990. In 1982, Della found her love of life! With the assistance of other residents of Fairmont who were caring people and the Farmers State Bank, the Fairmont Senior Center was started. Della was the Coordinator of this center for over 30 years. Della always stated she was like her Mother, caring and concerned for everyone. This job gave her the opportunity to be this to many residents in Fairmont. Della also hosted card playing at the Center every afternoon. Della loved to play any type of card game you can imagine. Bingo was a passion too. She kept herself busy almost every evening with some sort of game. In 2013, when Della started having health issues, she moved to Papillion, lived with her daughter Judy and husband Paul for eight months before she moved to the Nursing Home. The five years she lived at the nursing home was great fun for her. She never missed an activity in the building or an outing that was planned. She never spent much time in her room. She was always busy doing something. Della was the one to get card games going each night with other residents. If residents wanted to learn to play cards with the group, she would help to teach them the game. She was never without a deck of cards in her pockets! She is preceded in death by her parents, Charles and Jane Ann Keil, husband Francis D. Rose, Father and Mother in-laws, Arthur and Nora Ann Rose, siblings Richard Keil, Irvin Keil, Mary Ackerman, Luella Guthrie, Dorothy Garrett, sister in-laws and brother in-laws plus four nephews and four nieces. Della is survived by her children: Son William Rose (Cindy) of Fresno, CA, Daughters Judy Vacek (Paul) of Papillion, NE, Jann Morrison (John) of Greenwood Village, CO, and Beverly Buhr (Dennis) of Beatrice, NE. 8 Grandchildren, 13 Great- Grandchildren, plus many nieces, nephews, first cousins, and many friends.

A Memorial Service for Della will be held on Saturday, March 30, 2019 at 11:00 a.m., at the Fairmont Community Church with Pastor Pat Norris presiding. No Visitation - Cremation. Burial of Ashes will be held following the memorial service... View Obituary & Service Information

The family of Della L. Rose created this Life Tributes page to make it easy to share your memories.

A Memorial Service for Della will be held on Saturday, March...

Send flowers to the Rose family.