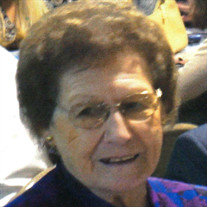 A Funeral Service for Delma was held on Wednesday, February 5, 2020 at 10:30 a.m., at Trinity Lutheran Church in Bruning, Nebraska with Pastor Stuart Sell presiding. Organist, Myra Kluck, accompanied the congregation as they sang 2 hymns, “Amazing Grace” and “On Eagle’s Wings”. There was also a special recorded selection played and it was, “Serenaded By Angels” by Kirk Talley. Casket Bearers included Delma’s grandsons, Jesse Houchin, Shea Austin, Nathan Carlson, Lane Claussen, Bret Carlson, Brent Houchin, Michael Houchin and Patrick Wells. Honorary Casket Bearers were Delma’s granddaughters, Jennifer Wragge, Nichole Seamann, Jenna Solbu, Jeanne Houchin and Lynn Wells. Graveside Services were held following the funeral service at Harmony Cemetery in rural Strang, Nebraska. Memorials were directed to Harmony Cemetery. Farmer & Son Funeral Home was in charge of funeral arrangements. Delma Louise Houchin, 92, of Bruning, NE passed away Friday, January 31, 2020 at Heritage Crossings in Geneva NE. Delma was born March 8, 1927 to Carl Christopher John and Clarissia Mary (Deaver) Bartling in rural Gilead, NE. She was baptized on May 1, 1927 at the Alexandria, NE Catholic Church. She grew up in the Gilead/Hubbell area with her 9 siblings. One story she told was how the family moved from one farm to another with teams of horses and wagons full of possessions. Her dad drove the first one, Delma drove the second one, and her brother, Darold, drove the last one. Delma attended a country school until the 8th grade. At sixteen, she moved to Hebron and worked in a Hebron grocery store. Delma met Wayne Houchin of Strang, NE and they were married at the Hebron Lutheran Church on August 10, 1947. It was a very hot day, Wayne always said it was 110 degrees (no air conditioning). She became a member of Trinity Lutheran Church of Bruning and was an active member. Delma and Wayne started their married life on the farm south of Strang. She worked alongside of Wayne doing various things like running a dairy operation, driving tractors, driving trucks during harvest, planting and preserving food from a large garden, and then raising seven children. During this time, she also worked at Messman Produce in Strang. The family moved to Bruning in 1970, where she worked part time for Bruning Banner, then Bruning Grocery, and then Bruning Café. She remained at home until 2018, when her health was failing her. Delma was known for her homemade pies, homemade donuts, beef and homemade noodles, and sauerkraut and dumplings. She was never happier to see and cook for the entire family on holidays or other family gatherings. Delma enjoyed square dancing, (even making her dress), playing cards (especially 10-point pitch), playing games, playing softball in Strang, attending children and grandchildren activities. Wayne and Delma attended home Husker football games and even went to a few bowl games. After she was unable to go to the games, several widow ladies and she would take turns hosting to watch Husker football and sometimes volleyball games. It was not unusual for Delma to wrap gifts for the grandkids with nothing inside of them just to see their reaction. One year the granddaughters got even and wrapped a big box of disposable plates, silverware, cups and napkins because they were getting to the age where they would be washing dishes after the family gathering. The grandkids always knew when they went to her house, there was a treat for them, whether it was a sucker, a small candy bar and always cookies in the deep freezer. Delma sewed most of the girls’ clothes as they grew and was good at fixing a torn seam or patching of jeans. After she moved to town, she would be seen sewing blankets at the church and taking some home to sew. Later she enjoyed using the used denim and making comforters for the grandkids. Preceding Delma in death are her husband, Wayne of 59 years, grandchildren, Carrie Leigh Koves, and Jay Ryan Houchin, brothers and sister in laws, Darold (Norma), Arlo (Rosemary), and Stanley (Diane) Bartling, sisters and brother in laws Carlene (Ernest) Kassebaum, Gladys (Max) Degenhardt, Nelva Grone, and Elaine (Dale) Mooberry. ​She is survived by sons, Wayne Jr (Joy) and Bruce (Mary) Houchin of Strang NE, daughters, Patricia (Clark) Wells of Lincoln NE, Rhonda (Darreld) Saltzman of Shickley NE, Roxanne (Douglas) Hafer of Geneva, NE, Glenda (Joel) Austin of Fairbury, and Denise (Lynn) Carlson of Shickley NE, sisters, Nola Bates of Davenport NE, Sheila (John) Stables of Carleton NE, and brother in law Hollis Grone of Davenport NE. Grandchildren: Lynn and Patrick Wells, Jennifer (Scott) Wragge, Jesse (Melissa) Houchin and Jeanne Houchin, Nichole (Chris) Seamann and Lane (Laura) Claussen, Jenna (Pal) Solbu, Shea (Johnna) Austin, Nathan (Michaela) Carlson, Bret (Amanda) Carlson, Brent (Lichelle) Houchin and Michael (Michaela) Houchin. Step Grandchildren are Christina (Greg) Adams, and Spencer (Angie) Hafer. Great-Grandchildren are Brooklyn and Joseph Wragge, Jaryn Houchin, Zach and Caleb Seamann, Sabastian and Madeleine Solbu, Andi and Harley Austin, Rileigh, Paityn and Carter Carlson, and Hallie Carlson. Step Great-Grandchildren are Bailey and Wyatt Hafer and Quinton, Morgan and Madison Adams. She also leaves behind numerous nieces and nephew and friends.

The family of Delma L. Houchin created this Life Tributes page to make it easy to share your memories.

A Funeral Service for Delma was held on Wednesday, February 5,...

Send flowers to the Houchin family.