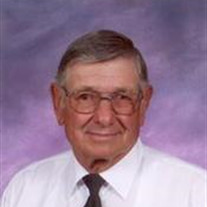 Delmar John Kuska was born on February 10, 1932, in Milligan, Nebraska, to John Kuska, Jr. and Julia (Hines) Kuska. He had a younger brother, Verlyn (Butch), and a younger sister, Judy. The family lived on the Kuska home place south of Exeter. Delmar attended country school Dist. #5 through the eighth grade and graduated from Milligan High School with the class of 1949. During his high school years, he and his cousin, Merle Buzek, stayed with their grandparents, Joe and Lizzie Svec, in Milligan. Delmar enjoyed all outdoor sports - hunting, fishing, and ice skating - and playing with the Bob Chudly band. After graduation he worked with a crew putting up grain bins and helped farmers in the area. In March, 1951, Delmar enlisted in the United States Navy for four years. He received the National Defense Medal and the Good Conduct Medal. He was stationed on Guam for 28 months, and received his discharge on March 9, 1955. He began to farm, and on May 24, 1956, he was married to Marjorie Langhorst at the South Lutheran Church by Ohiowa. He was baptized and confirmed at St. John’s Lutheran Church in Ohiowa, where the family still belongs. They were blessed with a daughter, Shelli, and a son, Galen. Delmar farmed and raised livestock in the Milligan/Exeter area all of his married life. The first few winters Delmar worked at the Melton Issler Motor Co., Swede’s Garage, and Tom’s Place. Delmar served on the Milligan School Board, and the Church Council; he was Commander of Milligan Legion Post #240 for three years, and managed the Legion Bar for many years. He was a member of the Milligan Czech Brass Band since he came home from the service. He enjoyed meeting friends for coffee at Elaine’s. He and Marge attended many dances, and the school and sports activities of their children and grandchildren, Casey, Allee, Megan, Steve, and Jake. They enjoyed some nice trips with family and friends. Delmar never quite retired from farming. He maintained his cow/calf operation until a couple of years ago, and helped Galen whenever he got the chance. Delmar passed away at the Friend Manor on Sunday, February 3, 2013, one week short of his 81st birthday. Preceding him in death were his parents, grandparents, and brother Butch. Survivors include his wife, Marge; daughter and son-in-law, Shelli & Jeff Krupicka; son and daughter-in-law, Galen & Sharon Kuska; grandchildren, Steve Krupicka, Jake Krupicka, Casey Kuska & wife Kristina, Allee Kuska, Megan Kuska & fiancé Justin White; sister and brother-in-law, Judy & Jerry Ware, sister-in-law, Joan Kuska and numerous other relatives and friends. Funeral services were conducted from the Milligan Auditorium on Wednesday, February 6, 2013, with Pastor James Sells and Father Rand Langhorst officiating. Deb Brunkow accompanied Karen Filipi who sang “One Day At A Time”. Casket bearers were John Becker, Roger Brandt, Marlon Buzek, Ronald Kuska, Russell Langhorst and John Kassik. Interment was in the Bohemian National Cemetery with armer & Son Funeral Home in charge of arrangements. Memorials are directed to the Milligan American Legion.

Delmar John Kuska was born on February 10, 1932, in Milligan, Nebraska, to John Kuska, Jr. and Julia (Hines) Kuska. He had a younger brother, Verlyn (Butch), and a younger sister, Judy. The family lived on the Kuska home place south... View Obituary & Service Information

The family of Delmar J. Kuska created this Life Tributes page to make it easy to share your memories.