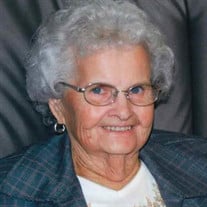 Delores Anne (Gerard) Folkerts-Zacharias was born on July 12, 1934 on a farm north of Ohiowa, Nebraska to Edward Anton and Anna Marie (Jurica) Gerard. She passed away peacefully on February 28, 2021 at the Country House Residence in Lincoln, Nebraska at the age of 86 years, 7 months, and 16 days. Delores attended grade school in Milligan. The family moved to Strang where she worked at Messman Produce as an egg grader at the age of 12 and bookkeeper at the age of 14. She attended Strang School and graduated Valedictorian of her class at the age of 16. After graduation, she attended Fairbury Teacher’s College and received her Teaching Certificate. She taught grades K-8 in a one room school house 4 miles west of Shickley, Nebraska. She was united in marriage to Leonard Folkerts at Trinity Lutheran Church in Bruning on August 10, 1952. She was baptized and confirmed at Trinity Lutheran Church. Delores and Leonard lived on the family farm east of Bruning. She worked alongside Leonard in the fields, but always had time for cooking, baking, canning, a large vegetable garden and many flower gardens. After Leonard’s unexpected death on January 14, 1997, she moved off the family farm and into Bruning. Delores was united in marriage to Robert Zacharias on April 10, 2002 in Chandler, Arizona. They enjoyed travel and Canadian fishing trips. She spent the winters at Hacienda Solano Park in Chandler for over 41 years. She served as President of Hacienda Solano Park Association for 17 years and Activity Director for 16 years. She also organized and booked bus trips for the park for many years. Delores always had her house surrounded in flower gardens. She enjoyed baking and cooking and sharing with family and friends. She was an active member of the Trinity Lutheran Church and was involved in Women’s Circle and Bible Study. In addition to her parents, Delores was preceded in death by her husband, Leonard Folkerts; husband, Robert Zacharias; son, Alan Folkerts; son-in-law, Robert Hansen; sister, Dorothy Ericson; and brother, Richard Gerard. She is survived by her daughter, Linda Hansen; daughter-in-law, Sheri Folkerts; grandchildren and great grandchildren; and sisters, Darlene Fry and Diana Johnson. A Funeral Service for Delores was held on Wednesday, March 2, 2021 at 1:00 p.m. at Trinity Lutheran Church in Bruning, Nebraska. Pastor Stuart Sell officiated the Funeral Service. Janice Fintel accompanied the congregation in the singing of “Amazing Grace” and “How Great Thou Art.” Pallbearers for the service included Dale Remmers, John Remmers, Lowell Schweer, Jr., Gary Hinrichs, Michael Hinrichs, and Jeremy Hinrichs. Interment was held in the Trinity Lutheran Cemetery, Bruning, Nebraska. Farmer & Son Funeral Home was in care of the arrangements and online condolences can be left at www.farmerandsonfuneralhome.com. Memorials are suggested to the family for future designation.

Delores Anne (Gerard) Folkerts-Zacharias was born on July 12, 1934 on a farm north of Ohiowa, Nebraska to Edward Anton and Anna Marie (Jurica) Gerard. She passed away peacefully on February 28, 2021 at the Country House Residence in Lincoln,... View Obituary & Service Information

The family of Delores Ann Folkerts-Zacharias created this Life Tributes page to make it easy to share your memories.

Send flowers to the Folkerts-Zacharias family.