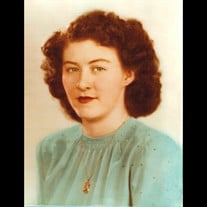 It was Delores' wish to be cremated and a private family graveside service will be held on Friday, May 15, 2020 at 2:00 p.m. at the Shickley Public Cemetery. Memorials are suggested to the family for future designation. Due to Covid-19 pandemic, we are limited to 10 people at the graveside service. We ask that the public respects the family's privacy and reserve the graveside service for them. A livestream video of the graveside service will be posted to our facebook page. If you click on the "view livestream link" on Delores' page on our website. Delores Edna Fox was born on July 19, 1930 to Cecil and Mabel (Yates) Fox in Geneva, Nebraska and passed away May 10, 2020 in Geneva, Nebraska at the age of 89 years, 9 months, and 23 days. Delores graduated from Geneva High School with the class of 1948. In the last months of her senior year, she worked at the Geneva General Hospital. Delores and Dean LeRoy Deepe were married on December 26, 1948 in a double wedding ceremony with Dean’s brother Owen Deepe and Donna Fidler, who was Delores’ best friend. The wedding was held at the Bruning, Nebraska farm home of the groom’s parents, Ed and Dorothea Deepe. To this union five children were born: Karen, Robert, Diane, Dennis, and David. They spent their married life farming and raising livestock. They first lived south of Shickley on the Thayer – Fillmore County line and later moved to a farm three miles south of Shickley. Dean died of a sudden heart attack November 1, 1966. Delores and the children lived in Geneva with her parents while a new home was being built south of Shickley that remained her home for the rest of her life. Delores started working at the Sunset Nursing Home in the fall of 1967, working there until they closed. She was remembered as being very caring to the residents and their families. The opportunity to become the Postmaster at the Shickley Post Office arose and she worked there until July 31, 1990, retiring after 22 years. In her spare time she also baked birthday cakes for all the nieces and nephews and in-laws. After Dean passed away, she expanded her baking and started baking wedding cakes leading to the business known as the ‘Cake house.’ Her daughter, Karen, later joined in the business. Delores and Gordon L. Johnson were married January 11, 1975 at her home in Shickley, and he instantly became a step-dad to ‘his’ children. Gordon died on March 13, 1991 after a lengthy battle with cancer. Delores was a member of the Shickley American Legion Auxiliary and active in the community. Preceding her in death were her parents; husbands Dean & Gordon; daughter Karen Reeb; and granddaughter Elizabeth Deepe. She is survived by her children Robert Deepe and wife Sharon of Hastings, Nebraska, Diane Deepe of Geneva, Nebraska, Dennis Deepe of Shickley, Nebraska, David Deepe and wife Sue of Shickley, Nebraska; son-in-law Richard Reeb of Shickley, Nebraska; grandchildren Angie Schaedel, Mike Reeb, Tim Reeb, Matthew Deepe, Mariah Deepe, Dillan Deepe and Wyatt Deepe; 6 great grandchildren; siblings Dorothy Novak and husband LaVern of Milligan, Nebraska, Alvin Fox and wife Virginia of McCool Junction, Nebraska; as well as numerous cousins and other relatives.

It was Delores' wish to be cremated and a private family graveside service will be held on Friday, May 15, 2020 at 2:00 p.m. at the Shickley Public Cemetery. Memorials are suggested to the family for future designation. Due to Covid-19... View Obituary & Service Information

The family of Delores E. (Fox) (Deepe) Johnson created this Life Tributes page to make it easy to share your memories.

It was Delores&#39; wish to be cremated and a private family graveside...