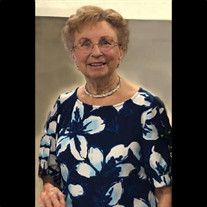 Delores Ann Roper was born to John J. & Christena M. (Yeck) Oliva on September 2, 1939 in Tobias, Nebraska. She passed away on Monday, November 9, 2020 at Fairview Manor in Fairmont, Nebraska at the age of 81 years, 2 months and 7 days. She was one of 10 children born in the family. Delores graduated from Milligan Public School with the class of 1957. After high school, she worked for Dr. Travnechek from 1957 to 1959, assisting him with blood draws and other clinical tasks. She also worked in the Fairmont Nursing Home part time for 1 year. Delores then entered into beauty school at the Lincoln Beauty Academy, graduating in 1961. She worked for Audrey Stewart in Friend, Nebraska for 3 months and then moved to Fairmont and worked for Nellie Molthan for 2 years starting in 1963. During this time, Delores met a young man named Marvin Roper. They dated for a short time before marrying in September of 1963. Two children were born to this union: Tammy & Gary. Delores & Marvin celebrated their 50th wedding anniversary in 2013. Delores was very active in the Fairmont community. She became a member of the Fairmont United Methodist Church in 1962, where she was a 50+ year member of the Women’s Club, and sang in the church choir for many years. Delores was a member of the Fairmont Chamber of Commerce, Fillmore County Foundation, and she worked as a volunteer for many blood drives for the American Red Cross. She also joined P.E.O. Chapter AM on October 21, 1985 and was very active in the organization. She enjoyed the philanthropy and camaraderie of the organization. Delores enjoyed quilting, x-stitch, embroidery, knitting and crocheting. She was very proud of her Czech heritage and enjoyed dancing to many polka’s and waltzes and attended several Czech Festivals in Wilber. Delores and Marvin bought a home in Mesa, Arizona in 1996 to escape the Nebraska winters. They enjoyed their friends from all over the U.S. and Canada; playing cards, shuffleboard, eating out, swimming and golfing. Some may also remember Delores’ role as a ‘Bag Lady.’ She loved to tease and joke around and the ‘Bag Lady’ was her way of bringing levity to her friends. Delores was preceded in death by her parents John & Tena; husband Marvin; brothers John, Leo, Rudy, Emil, Milo, Thomas, Melvin, and Louis ; and sister Alice Cox. Delores is survived by her daughter Tammy Kohler and husband Dick of Lincoln, Nebraska; son Gary Roper and wife Cheryl of Fairmont, Nebraska; brother in law Rev. Delvin Roper and wife Carolyn of Grand Island, Nebraska; 6 grandchildren, 15 great grandchildren and many nieces and nephews. A private Funeral Service for Delores was held on Friday, November 13, 2020 at 10:30 a.m. at the Fairmont Community Church. Pastor Seungli You officiated the Funeral. The recorded selections “Fill My Cup, Lord” and “Blue Skirt Waltz” were played during the Funeral. Pallbearers for the Funeral included Luke Meyer, Josh Meyer, Blake Meyer, Mark Oliva, Marcus Roper, and Ben Kohler A private Graveside Service was held in the Fairmont Cemetery following the Funeral Service. Farmer & Son Funeral Home was in care of the arrangements and online condolences can be left at www.farmerandsonfuneralhome.com Memorials are suggested to the Fairmont Community Church.

Delores Ann Roper was born to John J. & Christena M. (Yeck) Oliva on September 2, 1939 in Tobias, Nebraska. She passed away on Monday, November 9, 2020 at Fairview Manor in Fairmont, Nebraska at the age of 81 years, 2 months and 7 days. She... View Obituary & Service Information

The family of Delores A. Roper created this Life Tributes page to make it easy to share your memories.