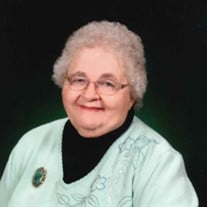 A Funeral Service for Delores will be held on Friday, February 11, 2022 at 10:30 a.m. at the Fairmont Community Church in Fairmont, Nebraska with Pastor Monica Magoola presiding. Visitation will be held on Thursday, February 10, 2022 from 3:00 p.m. until 8:00 p.m. with family present from 5:00 p.m. until 7:00 p.m. at Farmer & Son Funeral Home in Geneva, Nebraska. Graveside Services will be conducted following the funeral service in the Fairmont Public Cemetery. Memorials are to be directed to the Fairmont Community Church or Fairview Manor. Delores “Dee” Suzanne (Ronne) Swartz was born to Wayne Addison Ronne and Susan Mabel Isaac on March 8, 1937 at Lushton, Nebraska, and passed away on February 6, 2022 at the Kearney Regional Medical Center in Kearney, Nebraska at the age of 84. She was the oldest of four children in the family. After graduating from McCool High School in 1954, Delores attended Nebraska State Teacher’s College in Kearney, Nebraska and graduated Cum Laude with a B.A. degree in 1958. On September 6, 1959, she was united in marriage to Marvin Dean Swartz of Fairmont, Nebraska and to them three children were born: David James, Phillip Dean, and Merle Evan. Marvin and Delores honeymooned in Estes Park, Colorado, renting a beautiful cabin by the Big Thompson River for only $9.00. Marvin and Delores loved the mountains, scenic views and continued to vacation in Estes Park often. Upon receiving her teaching degree, Delores student taught in Lexington High School and full time at McCool High School prior to the birth of her children. During the summer months, she was employed at Midwest Irrigation Company in Henderson, Nebraska. Delores loved teaching and after raising her family, continued to use her teaching skills as a substitute teacher both in the local public schools and Epworth Village in York. Delores had the “Gift of Gab,” visiting with anyone whether it be a friend or stranger. Cooking was a favorite pastime for Delores. She cooked big meals and baked cookies/desserts of all kinds, making sure there was extra to send home with family or anyone who happened to visit that day, including stranded travelers on the highway or contractors who were just there fixing something at the house. Delores loved music of all kinds, singing in the church choir, playing the piano and pipe organ for many weddings and funerals, and still played the piano whenever she got the chance. Delores was a member of the Fairmont Community Church for over 50 years. She was also a member of the Fairmont United Methodist Women and P.E.O. Family was the most important to Delores, including raising her three boys, enjoying their school activities and ball games, helping lead the Keep Em’ Growing 4-H Club, and involvement with the Fillmore County Fair and State Fair. Delores’ greatest joy was becoming a grandmother to Kelsey Kay, Tyler Dean, and Trevor James. In October 2019, Delores moved to the Assisted Living “Country Reflections” in Fairmont, Nebraska, where she actively continued to work numerous crossword puzzles, never missed an episode of Jeopardy (and knew most of the questions), played the piano, and loved all her dear friends and nurses who cared for her every day. Delores was preceded in death by her husband, Marvin Swartz; son David Swartz; parents Wayne and Susie Ronne; father and mother-in-law Cecil and Leone Swartz; sisters Dorothy “Dots” (Bill) Jacobsen, Deanna (Kenneth) Teaford, and Donna (Gary) Clark, and brother-in-law Kenneth (Karen) Swartz. She is survived by two sons Phillip (JoDeen) Swartz of Exeter, Nebraska and Merle Swartz of Reno, Nevada; daughter-in-law Debra Swartz of Henderson, Nebraska; grandchildren Kelsey Swartz and special friend Andrew Webb, and Tyler Swartz all of Lincoln, Nebraska, and Trevor Swartz of Exeter, Nebraska and fiancé Jamey Broman of Geneva, Nebraska; sister-in-law Kathy Swartz Rudd of Omaha, Nebraska; along with many nieces, nephews, relatives, and friends.

The family of Delores S. Swartz created this Life Tributes page to make it easy to share your memories.

A Funeral Service for Delores will be held on Friday, February...

Send flowers to the Swartz family.