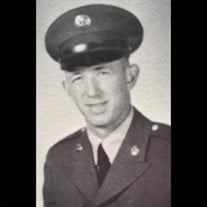 Dennis Lee Bumgarner was born to Homer & Gloria (Norder) Bumgarner on May 24, 1943 in Strang, Nebraska. He departed this life on August 27, 2021 due to complications from Parkinson’s Diseases at Eastmont Towers in Lincoln, Nebraska at the age of 78 years, 3 months and 3 days. Denny, as he was affectionately known, was baptized and confirmed at Trinity Lutheran Church in Bruning, Nebraska. He attended Bruning Public School and graduated with the class of 1961. He then attended Lincoln School of Commerce. Denny joined the United States Army on October 7, 1964 and was honorably discharged on March 20, 1965. Denny became a realtor in Lincoln and slowly bought and managed properties of his own. He also returned to Bruning for many years to help his parents with the farming operation. Denny enjoyed hunting and fishing. He also loved “mother nature,” respecting and admiring the land and all of the animals. He loved to dance, twirling his partner all around the floor! Denny had a big heart, and his humor and kindness to others was legendary. The people at Eastmont Towers were entertained by his jokes, pranks, smile and his thoughtfulness. Denny was preceded in death by his parents; aunts & uncles; and nephew Matt Karich. He is survived by his sister Dianne Karich Hite & husband Fred of Irvine, California; brother Randy Bumgarner & wife Vicki of Lincoln, Nebraska; nephews Roger Bumgarner & wife Steph and their children Will & Charlie, Lee Bumgarner & wife Whitney and their children Ben & Libby all of Lincoln, Nebraska, Eric Karich & wife Amy and their children Hayden, Avery, Ariel, Olivia, Andy Karich & wife Laura and their children Abby, Annie, and Brady, Mike Karich & wife Michelle and their children Charlie, Chloe, and Colt, Katie Karich and the late Matt Karich and their children Lilly and Bailey all of California. Denny will be greatly miss. He was a wonderful loving son, brother, uncle and friend. A public Graveside Committal of Ashes for Denny took place on Friday, September 10, 2021 at 11:00 a.m. at Trinity Lutheran Cemetery in Bruning, Nebraska. Pastor Stuart Sell officiated the Service. Military Rites were performed by the Nebraska Military Honor Guard. Memorials are suggested to the Trinity Lutheran Church or the Bruning Community Foundation.

Dennis Lee Bumgarner was born to Homer & Gloria (Norder) Bumgarner on May 24, 1943 in Strang, Nebraska. He departed this life on August 27, 2021 due to complications from Parkinson&#8217;s Diseases at Eastmont Towers in Lincoln, Nebraska at... View Obituary & Service Information

The family of Dennis L. Bumgarner created this Life Tributes page to make it easy to share your memories.

Send flowers to the Bumgarner family.