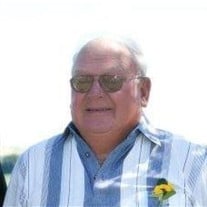 A Funeral Service for Dennis will be held on Monday, October 4, 2021 at 10:30 a.m. at the Immanuel Lutheran Church by Daykin, Nebraska with Pastor Gideon Pullmann presiding. Visitation will be held on Sunday, October 3, 2021 from 1:00 p.m. until 8:00 p.m. with family present from 1:00 p.m. until 3:00 p.m. at Farmer & Son Funeral Home in Geneva, Nebraska. Graveside Services will be conducted following the Funeral Service in the Immanuel Lutheran Cemetery (Church Cemetery) by Daykin, Nebraska. In Lieu of Flowers - Memorials are to be directed to the family to be designated at a later date. To view the Livestream Video you can go to Farmer & Son Funeral Home's Facebook Page or in your search engine type @friendlyfuneraldirectors and click the link to Farmer & Son or click this link https://www.facebook.com/friendlyfuneraldirectors/Funeral and it should direct you to our Facebook Page. Dennis Lee Schwisow was the 3rd son born to William and Dora (Bartels) Schwisow on September 27, 1940 in Daykin, NE. He gained his angel wings on Thursday, September 30, 2021 at Heritage Nursing Home in Fairbury, NE at the age of 81 years and 3 days. He grew up on the family farm and was confirmed in Christ at Immanuel Lutheran church in Daykin on May 16th, 1954. He received his education at Western Public School graduating in 1957. Following graduation, he moved to Lincoln and started his career working in grain sales for the elevator and later was transferred to Denver, CO. He was united in marriage with Charlotte Albina Zoubek in October 1959 at Immanuel Lutheran Church in Daykin, NE. Their union was blessed with 2 children, Kevin Scott (1961) and Kelly Kay (1963). They moved home from Colorado to Western, NE to farm. In addition to farming, he sold Wilson Seed and was proudly a Vermeer Baler dealer for 40 years before retiring in 2020. Dennis was a volunteer fireman and EMT with the Western Fire & Rescue Department. He was a lifelong member of Immanuel Lutheran Church in Daykin. Following the passing of Charlotte in 1992, Dennis was united in holy matrimony with Shari Lee (Davidson) Jarchow on March 17, 1993 in McAllen, Texas at St. Paul Lutheran Church. They enjoyed wintering in Mission, TX for 20+ years. They also watched their grandchildren grow from the family farm in Western, where they built a house overlooking the farm. He enjoyed cheering on the Huskers and loved baling hay. Dennis is survived by his wife, Shari; children, Kevin and Kelly Theis (Scott); Brad Jarchow (Vicki), and Kelly Maronde (Daren); grandchildren: Michael Theis (Beth), Wendy Zielke (Josh), Danielle Jaeger (Jacob), Atlanta Wilson (Tyler), Allee Maronde, Ansley Maronde, Jenica Jarchow, Jadelyn Jarchow; and great-grandchildren: Madison, Gabrielle & Bailey Theis; Alex & Eli Zielke; Charlotte, Huckson, & Kipton Jaeger; and Lily Wilson. Dennis was preceded in death by his parents (William and Dora), siblings (Willis, Dale, William, and Arlene Roesler), and first wife, Charlotte.

A Funeral Service for Dennis will be held on Monday, October 4, 2021 at 10:30 a.m. at the Immanuel Lutheran Church by Daykin, Nebraska with Pastor Gideon Pullmann presiding. Visitation will be held on Sunday, October 3, 2021 from 1:00 p.m.... View Obituary & Service Information

The family of Dennis L. Schwisow created this Life Tributes page to make it easy to share your memories.

A Funeral Service for Dennis will be held on Monday, October...