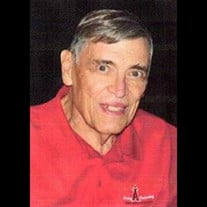 A Celebration of Life was held at Arizona Community Church on April 30, 2016. A public Graveside Committal of Ashes will be held at 11:00 a.m., Saturday, June 25, 2016 at the Geneva Public Cemetery. Pastor Gene Carlson will preside over the services. In lieu of flowers, memorial contributions can be made to Sunshine Acres Children’s Home or Arizona Community Church Food Bank. Farmer & Son Funeral Home conducted the services locally. Dewain Charles Cisney was born February 5, 1938 in Wakefield, Nebraska, to Giles and Margaret Cisney. He went home to be with his Lord and Savior, Jesus Christ, on April 7, 2016. Dewain spent his youth in Wakefield, graduating from Wakefield High School in 1955. He went on to attend the University of Nebraska and became an active member of the Theta Xi Fraternity. While there, he majored in Business Administration and was one of the founders of the Theta Xi Driftwood Party. He met his future wife, Sharol Schelkopf at the University of Nebraska and married her on June 26, 1960, in Geneva, Nebraska. After college, Dewain joined the United States Marine Corps as a 2nd Lieutenant and was stationed with the First Marine Brigade in Kaneohe Bay, Oahu, Hawaii. He was the Team Captain of the Hawaii Marine Rifle & Pistol Team. He left the Corps as a Captain to pursue a career as a stockbroker with Dean Witter and Co. in Scottsdale, AZ. In 1974, he accepted a position as the Vice-President, Resident Manager of Dean Witter, and Co. in Boca Raton, Florida. In 1976, Dewain returned with his family to Arizona. After 27 years in the brokerage business, he joined Valley National Bank as a Trust Officer and eventually retired from Wells Fargo in May 2003, as Vice-President, Senior Trust Administrator. Dewain enjoyed his retirement and found pleasure in volunteering. He volunteered weekly as a Navigator at Sky Harbor Airport and especially relished his weekly time at the Veterans’ Administration Hospital. He also volunteered as an usher at Tempe Diablo Stadium for the Angels’ spring training. He found many opportunities to serve at his church and delighted in spending time with people who loved his Savior! In 2014, Dewain and Sharol moved to Friendship Village. Dewain met many new friends in the Village and found new opportunities for fun and growth. Dewain is survived by his wife, Sharol (Schelkopf) Cisney; two daughters and their husbands, Valerie and Craig Idler and Jacqueline and Jeffrey Hensley; and four grandchildren: Alissa Idler, Garrett Idler, Jacob (Kacee) Hensley, and Joelle Hensley. He is also survived by his mother, Margaret, and brother, Jesse. He was preceded in death by his father, Giles Cisney. Dewain was known for his integrity, faith, love of family, and loyalty. He was passionate about Big Red football, his hometown of Wakefield, Diamondbacks’ baseball, and cheering on his grandchildren at their school activities and sporting events! He taught his family many lessons through a life well lived.

A Celebration of Life was held at Arizona Community Church on April 30, 2016. A public Graveside Committal of Ashes will be held at 11:00 a.m., Saturday, June 25, 2016 at the Geneva Public Cemetery. Pastor Gene Carlson will preside over the... View Obituary & Service Information

The family of Dewain Charles Cisney created this Life Tributes page to make it easy to share your memories.

A Celebration of Life was held at Arizona Community Church on...

Send flowers to the Cisney family.