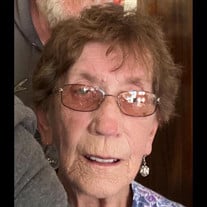 A public Graveside Committal of Ashes will take place at the Fairmont Cemetery on Thursday, December 3, 2020 at 2:00 p.m. Pastor Doug Griger will officiate the service. Memorials are directed to the family. Diane Kay Peschel was born to Orville & Mona (Resseguie) Dunkin on February 22, 1941 at Geneva, Nebraska. She passed away on November 29, 2020, at the Fillmore County Hospital in Geneva, Nebraska at the age of 79 years, 9 months, and 7 days. Diane grew up in the Geneva area and graduated with the class of 1959. She was married to Melvin Stejskal and to this union 3 children were born: Mark, Doug and Melissa. She then was married to Raymond Peschel on June 24, 1984. In 1999, Diane and Ray traveled to Texas and ended up going down there for 12 years during the winter and returning to Nebraska during the summer. In Texas, they enjoyed many Sundays listening to music and dancing at their favorite dance halls with good friends and sometimes family. Diane’s favorite flower was the Yellow Rose and coincidentally she was called “The Yellow Rose Of Texas” by her friends while living in Texas. Diane loved to cook for her Texan friends and they said her food from the ‘North’ tasted better and definitely impressed them. Diane had a love of Polka music and she enjoyed listening to her son, Mark, play the accordion with her family and friends. She also loved afternoon rides in the country with Ray, going for ice cream, gardening, canning, cooking, playing yard games with friends and family and then relaxing in front of the TV with Ray in the evenings. Diane will be missed dearly by all of her family and friends, but her memory will live on forever. Diane was preceded in death by her parents Orville & Mona; and brothers Gary and Sherman. She is survived by her husband Ray Peschel of Geneva, Nebraska; sons Mark Stejskal and Lori Kelch of Crete, Nebraska and Doug Stejskal and wife Renee of Almena, Kansas; daughters Melissa Valenta and husband Jeff of Nebraska City, Nebraska, Juanita Peschel and Brenda Peschel of Benedict, Nebraska; brother Don Dunkin and wife Trudy of Geneva, Nebraska; sister-in-law Peggy Dunkin of Waverly, Nebraska; grandchildren Daulton Stejskal, Preston Kelch, Chayton Stejskal, Natasha Kelch, and Brady Hale all of Crete, Nebraska; great grandchildren Kaydan, Bentley, and Aydon Kelch; and many nieces, nephews, and friends.

A public Graveside Committal of Ashes will take place at the Fairmont Cemetery on Thursday, December 3, 2020 at 2:00 p.m. Pastor Doug Griger will officiate the service. Memorials are directed to the family. Diane Kay Peschel was born... View Obituary & Service Information

The family of Diane K. Peschel created this Life Tributes page to make it easy to share your memories.

A public Graveside Committal of Ashes will take place at the...

Send flowers to the Peschel family.