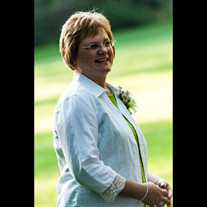 Diane Marie (Tullberg) Row died peacefully on August 9, 2016 in Grand Island, Nebraska following a long battle with metastatic breast cancer; she was 60. Diane was born on December 16, 1955 in Sioux City, Iowa to Myron and Gwendonna (Murfin) Tullberg. She spent her childhood on dairy farms in northeast Nebraska, creating in Diane a deep connection with the land that lasted all her life. She was the second of five children and she was a devoted sister who adored (and occasionally sassed) her siblings. Diane was always bright and insatiably curious. She encountered a number of early influential teachers who recognized and developed her intelligence, creativity, and work ethic. Diane graduated from Wakefield Public High School in 1974; she became the first person in her family to pursue a Bachelor’s degree, studying first at Doane College before completing a Fine Arts in Education degree at the University of Nebraska-Lincoln in 1978. In college, Diane met Mike Row, her best friend for the rest of her life. They were married on July 15, 1979 and spent the next 37 years laughing together, pestering each other, supporting one another, learning together, and loving one another in the model of Jesus. They raised three children: Lindsey, David, and Daniel. Diane jokingly awarded them “Perfect Child Points” when they did things that pleased her (like fetching her more M&Ms or boasting about their Swedish heritage), but she shone with pride when they stood up for one another and persued their passions. After two years teaching at Stromsburg High School, Mike and Diane left Nebraska for Texas, attending Christ for the Nations Institute in Dallas; both received associate degrees in Practical Theology there in 1982 and went on to be ordained by the Church of the Brethren, Mike in 1982 and Diane in 1984. Diane was a gifted preacher, and she and Mike served congregations of many denominations who were between pastors or whose pastors were temporarily absent. For the last decades of her life, she was a vital member of Salem Mennonite Church in Shickley. The Saturday morning women’s Bible Study became a special source of faith and friendship for Diane. In 2009, she became the first woman to be elected to the Salem’s board of Elders, and she served the church faithfully in that role for several years. Diane’s greatest ministry was always in the classroom. She was an exceptional educator and she cared for her students fiercely. She taught first at Stromsburg, then Fillmore Central, and finally, for 15 years, at Deshler Public Schools. Hundreds of students can testify to her tremendous gifts as a teacher. She invested mountains of time and energy into developing the best art program she could muster and her dedication was evident in her students’ work. (Of course, as much as she cared about teaching, she also enjoyed a day off, and Diane delighted in leading her students in “snow dances” designed to encourage blizzards.) Most of all, Diane loved her students; she wanted them to learn and love art, but she wanted them to be better people first. Because of her, they were. While cancer troubled the last years of Diane’s life, they were still years rich with joy. She still loved making new friends with random people in convenience stores, loved going on “adventures” where the itinerary was determined by whim, loved watching silly TV shows, loved teasing everyone around her (especially Mike), loved insisting that we stop and read every historical marker we passed on the road. Most of all, she loved spending time with her family. The birth of her grandson Silas in 2014 made these last years particularly blessed; Diane was so proud to be his Grammy. She fought her illness with relentless determination and courage, and through Mike’s deep care of her, the assistance of her wonderful doctors, the support of her community, and the grace of God, she enjoyed a full and joyful life until the end. She died confident of even greater joy in the life to come, at peace in the love of Jesus. Diane is survived by her husband of 37 years, Michael Row; daughter and son-in-law Lindsey and Zachary Row-Heyveld of Decorah, Iowa; sons David Row of Lansing, Michigan and Daniel Row of Madison, Wisconsin; and her beloved grandson Silas Row-Heyveld of Decorah. She is also survived by her four siblings and their spouses: Linda (Monty) Granfield of Randolph, NE, Dennis (Melia) Tullberg of Wakefield, NE, Connie (David) Herbster of Sabetha, KS, and Gary (Michelle) Tullberg of Lenox, IA; her parents-in-law, Doug and JoAnn Row of Bruning; brothers- and sisters-in-law: Mark (Eileen) Row of Lincoln, Jeff (Sally) Row of Bruning, Valerie (Dan) Papik of Crete, and Michelle (Steve) Vogt of Wichita, KS; many nieces and nephews; and many cousins. She was preceded in death by her mother, Gwendonna Tullberg; her father, Myron Tullberg; and her niece, Brenna Herbster. Funeral services for Diane were held on Saturday, August 13, 2016 at 10:00 a.m. at the Salem Mennonite Church, rural Shickley, Nebraska. Pastors Shawn Nolt & Matthew Troyer-Miller officiated the services. Judy Lichti accompanied the congregation and Roxie Schlegel led in the singing of “Great Is Thy Faithfulness,” “My Hope Is Built On Nothing Less,” and “When Peace Like A River.” Pallbearers for the service included Spencer Tullberg, Dawson Tullberg, Kevan Herbster, Brad Petersen, Jeremy Row, and Ben Row. Interment was held in the Bethel Cemetery following the funeral service. Memorials are directed to the Royal Family Kid’s Camp, PO Box 83995, Lincoln, NE 68501. Donations can also be made through http://gi-york.royalfamilykids.org/donations/ Farmer & Son Funeral Home conducted the services. Online condolences may be left at www.farmerandsonfuneralhome.com.

The family of Diane M. Row created this Life Tributes page to make it easy to share your memories.

Send flowers to the Row family.